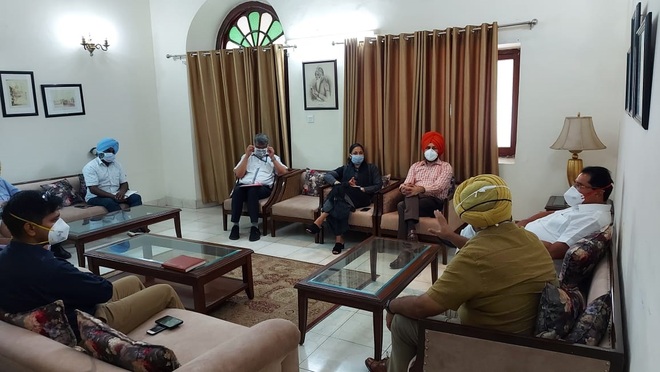 Of the new cases, 43 are patients with ILI symptoms and 68 are contacts of positive cases.

In the highest single-day spike since the outbreak of the Covid-19 pandemic in the district, the Health Department has reported 111 new positive cases on Saturday. The district also reported two deaths taking the toll to 92. The deceased have been identified as Kamlesh Rani, a resident of Rose Avenue, and Jang Bahadur, a resident of Krishna Square.

Of the 68 contact cases, 36 are from the Central Jail (both employees and inmates), nine from the BSF battalion posted at Khasa, five from Jandiala Guru, four each from Majitha Road and Budha Theh Village, three from Maha Singh Gate, two each from Guru Ramdas Avenue (Airport Road), Indira Colony and Parvati Devi Hospital and one from B-Division police station.

With the new cases, the total count of positive cases has reached 2,307 in the district. The health authorities claimed that 73 more patients had recovered from the disease. The district has witnessed a total of 1,720 recoveries till date. At present, the district has 495 active cases.

Meanwhile, Medical Education and Research Minister Om Parkash Soni said four new Covid-19 testing labs would be inaugurated in the state on Monday. He said two labs were being opened in Mohali and one each in Ludhiana and) Jalandhar. Soni said each lab would test 1,000 samples daily. With the opening of the new labs, the state’s capacity to test Covid-19 samples per day would reach 16,000, he added.