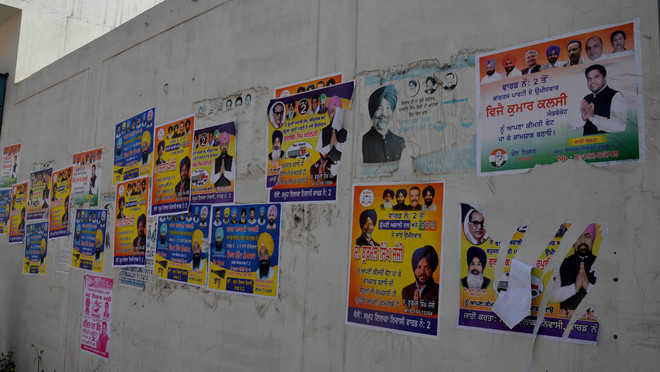 The Election Commission is against defacing trees and green belts with posters during the elections.

The Deputy Commissioner directed everyone to remove campaign material from government buildings and trees planted on government land. In his order, he asked officers of all departments to keep an eye on their offices and other government property, so that no candidate could violate the election rules by putting up posters, banners or flexboards on public property.

Khaira said all government properties such as electricity and telephone poles, buildings, bus stands, bus shelters, railway stations, roundabouts, pillars of flyovers should be protected from election campaign material. If any such material was found anywhere, it should be removed immediately. In addition, legal action would be taken against those, who display the campaign material.

He said any candidate, who wants to conduct his campaign with such means should do so at designated places provided by the Municipal Corporation (MC) and inform the returning officer about the inclusion of this expenditure in his election expenses.

Political parties often display their boards and hoarding on trees by putting a nail on these. It not only damages the tree, but restricts its growth as well.

Report violations of Model Code of Conduct on mobile app

Amritsar: Residents can now use cVIGIL mobile application of the Election Commission to report violations of the Model Code of Conduct by political parties and candidates during the Assembly elections. The application can be downloaded from Google playstore. Kulwant Singh, District Election Officer, Tarn Taran, said: “The application ensures protection of identity of the user and at the same time enables him to report violations of the election code.” He said people should report violations to ensure transparent and fair elections. Users would also be able to upload a picture or a short video of the violation as an evidence while reporting any violation. Kulwant Singh said action of such complaints would be ensured within 100 minutes of receiving the complaint. To check misuse of money during the elections, residents would be required to carry documentary proof if they are carrying more than Rs50,000 cash. The ECI guideline is aimed at checking misuse of cash for luring voters. In case a person is found carrying more than Rs50,000, the money would be confiscated. OC