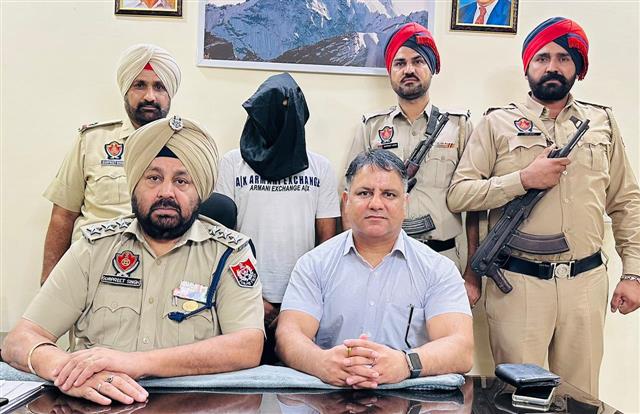 The Crime Branch officials with the accused in Amritsar IED case in Ludhiana on Tuesday. Tribune Photo

The Crime Branch of Ludhiana Commissionerate arrested a Phagwara resident on the charges of supplying logistics and giving shelter to key accused Yuvraj Sabharwal, who had planted IED under the car of a police official in Amritsar.

Crime Branch Inspector Beant Juneja said the arrested accused has been identified as Avi Sethi, who was working in PSPCL on contract basis and was a call attendant in the complaint cell of the PSPCL helpline number 1912.

He was in touch with the IED case key accused Yuvraj.

On Monday, the Crime Branch had received secret information that wanted accused Avi was roaming in Dugri area. Accordingly a police party conducted a raid and nabbed the accused.

"After planting IED under the cop's vehicle, key accused Yuvraj had come to Phagwara and stayed at the shelter provided by Avi. Even other logistics like money, mobile phone, etc., was also arranged by Avi for Yuvraj," added Inspector Juneja.

Notably on August 16, 2022, two unknown motorcycle-borne persons had planted an IED under the Bolero SUV (PB02-CK-0800) of SI Dilbag Singh. The vehicle was parked outside his residence in the area of C-Block Ranjit Avenue, Amritsar.

The mobile phone-triggering IED, weighing around 2.79 kg and carrying around 2.17 kg high explosive, was recovered before detonation by the police.

The Amritsar police had arrested key accused Yuvraj along with his two aides from Kullu three days back.

A police official requesting anonymity said accused Avi had received money in two transactions of Rs 25000 each reportedly from the Canada-based terrorist Lakhbir Singh Landa. The Crime Branch recovered a mobile phone on which some calls were reportedly made by Avi to Landa and verification of this angle was on to corroborate the facts. Avi has no other criminal history.