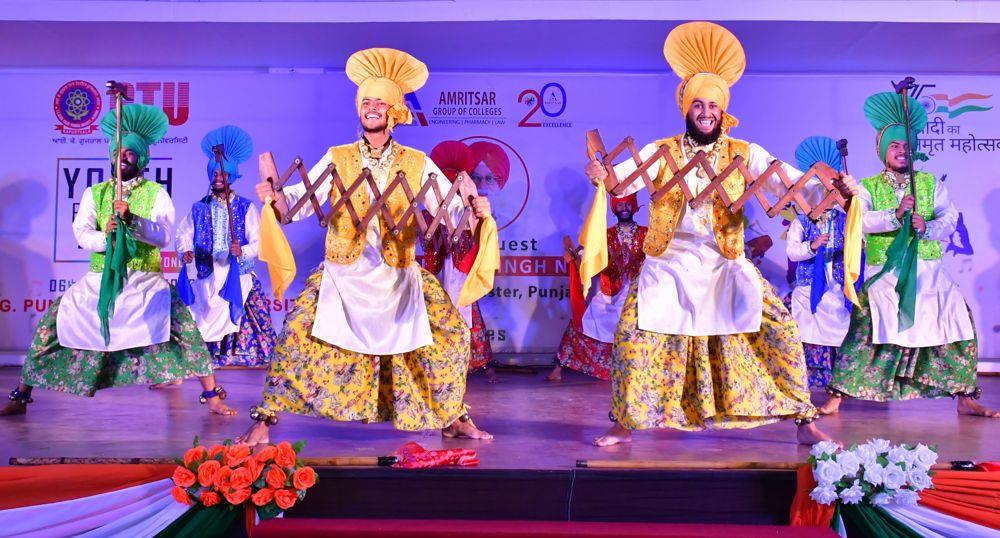 Students perform bhangra at the youth festival that began at Amritsar Group of Colleges in Amritsar on Thursday.

Amritsar: The three-day North Zone Youth Festival-2022 of IKGPTU, Kapurthala, began at the Amritsar Group of Colleges (AGC), Manawala campus. Cabinet Minister Dr Inderbir Singh Nijjar, the chief guest, inaugurated the youth festival, in which around 498 students from 80 colleges of the North Zone districts comprising of Amritsar, Gurdaspur, Jalandhar, Tarn Taran and Pathankot will be participating. A total of 18 events, including dance, musical items, plays, fine arts and literary items, were held at four venues on Thursday. Dr Nijjar talked about Punjabi culture, its rich heritage, folk songs and dances. AGC Chairman Amit Sharma said youth festivals play a pivotal role in grooming the youth and boosting socio-economic and cultural development of the country. AGC Principal Dr VK Banga, while speaking on the occasion, said youth festivals aim to propagate the concept of national integration, spirit of communal harmony, brotherhood, courage and adventure amongst the youth by exhibiting their cultural prowess at a common platform.

The Department of Biotechnology at DAV College organised an interactive session for the students of BSc Biotechnology and BSc Medical. The session was conducted by Dr Vivek Mahajan, Associate Director, Vivo Pharmacology, Onocology, at GSK, Pennsylvania, the US. It started with a discussion with final year students of BSc Biotechnology, in which he guided them about various career opportunities in Biotechnology. It was followed by a guest lecture entitled “Pre-clinical immuno-pharmacology in cancer drug discovery” in which he discussed issues and challenges in cancer drug discovery. He also shared his own life experiences about how he entered the world of oncology from the world of bacteriology and motivated listeners that it’s never too late to go after what you like. In the end, there was an interaction with faculty of sciences.

Students of Bhavans SL School were selected as the best cadets in the NCC Camp 24 Punjab Battalion organised in Ropar and Gurdaspur. Two students, Sejal and Jai of Class IX got selected from Amritsar as the Best Cadets. Sejal has been selected for the next Best Cadet Competition which will be held in Batala. The winner of this competition will be given the Best Cadet Award on Republic Day next year in New Delhi. Chairman of the school Avinash Mohindru and Director Principal Dr Anita Bhalla congratulated the students and their care taker officer Bhanu Sharma.

The Department of Computer Science, SR Government College for Women, organised a seminar on Cyber Security Awareness to observe Cyber Awareness Day on October 6 as per the orders issued by the Ministry of Education, Government of India. With an aim to promote cyber hygiene as a public awareness campaign, Cyber Crime ACP Kanwalpal Singh and Saanjh Kendra district in charge Paramjit Singh talked about rising cybercrimes, the laws for curbing of the same and how citizens need to be aware of the cyber security system. Students of the Computer Science Department also talked on the issue. Preet Davinder, Head of the Department of English, thanked the speakers for creating awareness among students about the issue.