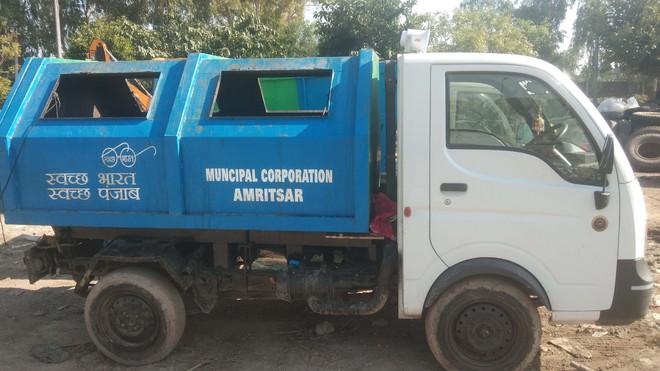 Tackling waste: A garbage collection van of the Municipal Corporation with different compartments for dry and wet waste.

The health wing of the Municipal Corporation has been taking several steps to ensure segregation of garbage at door-to-door level and on dumpsites. The door-to-door garbage collection vehicles were also modified and different compartments for dry and wet garbage.

Last month, Councillor Sandhya Sikka, leader of opposition, had criticised the MC’s segregation drive of segregation of garbage as collection vehicles were not equipped to keep the dry and wet garbage separate.

Dr Ajay Kawar, Municipal Health Officer (MHO) said, “We have divided the garbage collection vehicles. We have also asked the residents to segregate garbage waste at house-hold level only. We have distributed bins to keep the garbage separate. The garbage from the kitchen should be kept separate.”

The health officials also warned the residents that if they would not segregate the garbage, the MC will impose the penalty.

“We will impose a penalty for not keeping separate bins for dry and wet garbage. The residents have been asked to make required arrangements within one week. Our sanitary inspectors will keep a check in the localities and impose a penalty on the violators,” the MHO said.

The officials stated that the MC had been making all these efforts to improve the ranking of the city in nationwide Cleanliness Survey 2021. This year, the city ranked the 9th dirtiest in the country.