Was entrusted with the task of removing political hoardings 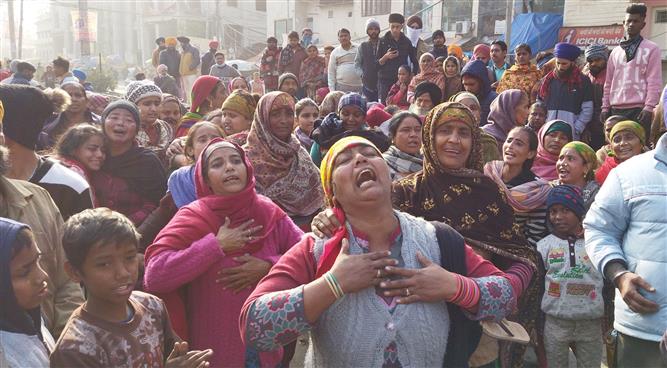 The wailing family members of the victim — Bobby. He was engaged and his marriage was scheduled to be solemnised after Lohri. Photo: Vishal Kumar

A 24-year-old employee of the municipal corporation, identified as Bobby, a resident of Noori Mohalla near Bhagtanwala, was electrocuted near Gurdwara Shaheed Baba Deep Singh when he along with three other colleagues was removing hoardings of politicians here on Monday.

Another person, identified as Ashok Kumar, was also critically injured and rushed to hospital.

Though eye-witnesses claimed that three persons were electrocuted, the police said they received the information of only two persons.

The wailing family members of the victim held a demonstration outside Guru Ramdas Hospital on the outer circular road of the walled city. They alleged Bobby was a contractual safai karamchari and it was not his duty to remove hoardings.

They alleged that a sanitary inspector forced him to accompany others to remove hoardings.

His family members said that Bobby was engaged and his marriage was scheduled to be solemnised after the festival of Lohri.

Vimal, a relative of injured Ashok Kumar, said that he had been working on contract with the Municipal Corporation for the past 30 years.

Owing to being electrocuted, the right side of his body was burnt leaving him handicapped, he said.

He demanded that the department should regularise him, besides bearing his treatment costs. He alleged that private hospital authorities were demanding money for tests and advance before starting his treatment. ACP Manjit Singh reached the spot and tried to pacify the agitators. He said the police got the information of electrocution of two persons. He said while removing hoardings, they accidentally touched a live wire which led to the incident.

Lovedeep Singh Gill, SHO, Division B police station, said the statement of the victim’s family was being recoded and a case would be registered accordingly.

Amritsar: Following imposition of the Model Code of Conduct, the district administration, led by Additional Deputy Commissioner Dr Roohi Dug, has banned carrying all types of weapons, explosives and flammable material. In the order passed under Section 144 of the Criminal Procedure Code, she said it would not be implemented on policemen, paramilitary forces and Army personnel. It would remain in force till March 12, 2022. Even those having arm licences were not allowed to carry weapons. She said weapons could be misused and create law and order situation during elections. Meanwhile, following directions of the Election Commission of India, Additional Deputy Commissioner Dr Roohi Dug on Monday held a meeting with printing press owners and asked them to follow instructions issued by the Election Commission in letter and spirit. She said the name and address of the printer and publisher should be there on every pamphlet or poster printed by them during the upcoming Assembly poll. “Along with the name and address, they would also have to ensure to take a declaration and signature of two witnesses from their clients for printing or publishing election material,” she said. They would have to deposit the material published along with the declaration to the district magistrate’s office. She warned that if the publisher or printer violated the instructions their licence could be cancelled besides they could even face imprisonment. She said any type of printing or publishing of election material would be accounted in the election expenditure of the party or the candidate. She said if it was printed with the consent of the candidate, it would be added in its expenditure and if it was not printed with his consent, the printer or publisher would be held liable for violation. TNS