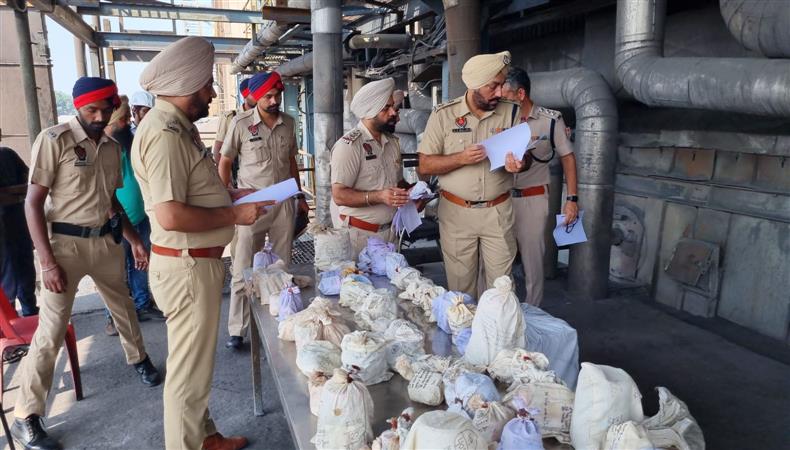 The Amritsar police destroy drugs at a paper mill in Amritsar on Saturday. Tribune photo

The Amritsar city police destroyed drugs worth crores seized under the NDPS Act at a Khanna Paper Mill’s incinerator here on Saturday.

Bhullar said 3.42-kg heroin, 1.1-kg charas, 17.5-kg poppy husk, over 64-kg ganja, over 21,000 of intoxicating tablets/capsules and 4.7-kg narcotic powder, which were seized during the past several years, were destroyed.

The DCP said the Punjab Police were determined to eradicate drug menace from the border state. He said for this, the department had renewed its strategy and intensified its operations.

“In order to dismantle the supply chain, the police have been investigating deep into the backward and forward links of drug peddlers nabbed by the police in the recent past,” he said while urging people to cooperate with the police by sharing information about the traffickers.

Meanwhile, the Pathankot police destroyed drugs worth several crores, seized under the NDPS Act by various police stations of the district, at the mill’s incinerators here on Friday.

“The contrabands were inspected and weighted by the committee members and the entire process was video graphed and supervised by the drug disposal committee,” he said. The SSP said the destroyed drugs included 1.295-kg charas, over 882-kg poppy husk, over 19-kg intoxicating powder, 54-gm heroin and 100 intoxicating capsules.

He said special checking points were set up on roads connecting the state to Jammu and Kashmir to keep vigil as the route was being used by drug smugglers to push drugs into Punjab.

During the past two months, the police are making efforts to dismantle the supply-chain of drugs coming from Jammu and Kashmir to Punjab. The Pathankot police have registered 63 cases and arrested 96 accused. Around 555.60-kg poppy husk, 3.57-kg charas, 453-gm heroin, 185-gm intoxicating powder, 40-gm opium and 100 intoxicating capsules have been recovered. Besides, six trucks, seven cars and 14 two wheelers have been impounded by the police.