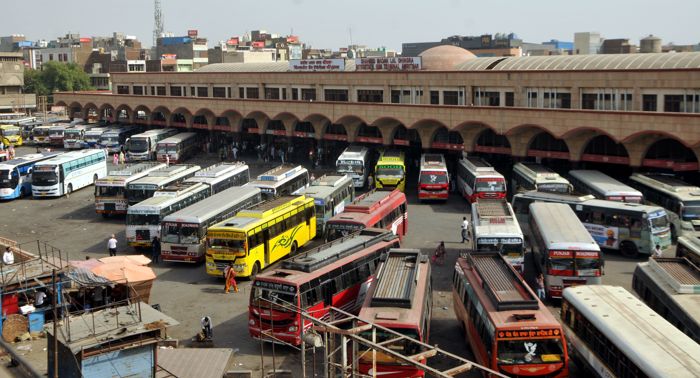 The area around the ISBT witnesses heavy traffic throughout the day and the resultant traffic blockades, leaving little space for commuters to move. Photo: Vishal Kumar

Residents of the city are a harried lot as their demand for shifting the inter-state bus terminal (ISBT) out of the city for decongesting the area has failed to elicit any response from the government so far. The area around the ISBT witnesses heavy traffic throughout the day and the resultant traffic blockades, leaving little space for commuters to move.

The residents, who face traffic jams on roads around the ISBT, have been raising the demand to shift it to Vallah as it will assist in decongesting the area around. It will minimise danger to commuters and tourists while crossing road around ISBT.

The shifting of ISBT to Vallah was proposed in 2015 and the then government had made efforts for it. Former MLA Navjot Kaur Sidhu made efforts and took up the issue with higher officials. In 2015, the comprehensive mobility plan (CMP) prepared by the Punjab Municipal Infrastructure Development Company (PMIDC), a department of the Local Government, for infrastructure development of the city for the next four decades, also proposed to shift ISBT out of the city.

The residents claimed that the shifting of ISBT would resolve persistent traffic problems on many roads, including the stretch from Gurdwara Baba Deep Singh Shaheedan to Rambagh Chowk, GT Road Maqbool Chowk to Bhandari railway overbridge and other places. Encroachments around ISBT also create problems for commuters. The MC had failed to establish the street vending zone in the past.

A large number of kiosks along the boundary wall of the bus stand, which have been there for the last many years, have further congested the road. Adding to the problem are auto-rickshaws, which are stopped on the road to pick and drop passengers, around the ISBT.

Michal Rahul, a social activist, said, “Not only traffic congestion, air and sound pollution also affect the Golden Temple, which is less than one kilometre from the bus stand. All the main road links connecting with the Vallah area and it would be better to shift ISBT to Vallah.”

The office-bearers of the Amritsar Vikas Manch also wrote to CM Bhagwant Mann suggesting him to shift ISBT at Vallah.