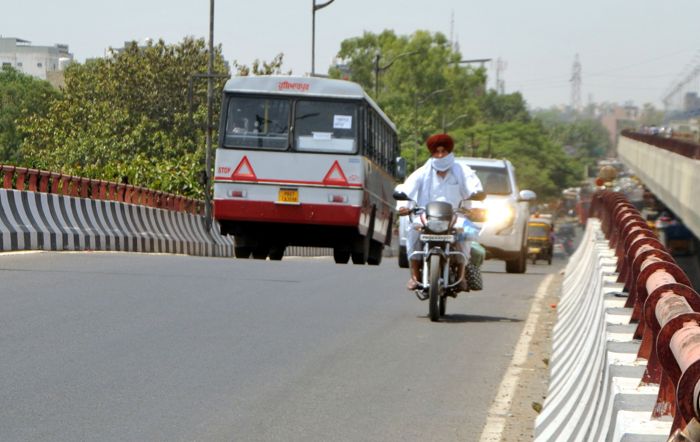 The Wrong turn: A vehicle takes the wrong side on the elevated road, near the Jahajgarh area, from where vehicles from GT Road come down towards the Golden Temple parking in Amritsar. Photo: Vishal Kumar

The recent spate of road accidents in the city is ample proof that its roads are becoming unsafe for commuters here. Travelling on these roads is becoming more and more dangerous. People need to be more alert, especially if they are driving or travelling on two-wheelers.

Six persons, including a minor boy, have lost their lives in the last one week. The experts and residents of the city feel that a number of factors were responsible for the spurt in road mishaps.

Rash and drunk driving, not following traffic norms, lack of traffic cops on roads, rampant encroachments gobbling up footpaths and irresponsible behaviour of commuters were among a few major reasons.

Rasam Sharma and her 4-year-old son Hritwik died in a road mishap five days ago, when she was going to drop him to school. A rashly driven car hit her scooter leaving them critically injured. Later, they succumbed to their injuries. The incident occurred on the bypass road from Taran Wala Pul to Tarn Taran Road.

The same day, Satpal Singh, a dairy owner, was killed after an SUV hit him when he was returning home on foot after shutting down his dairy.

A student died while his friend was critically injured when the bus of same institute, where the two studied, hit their scooter near Khanna Paper mill on the Amritsar-Attari bypass road on May 11. Gobind Arora died on the spot, while Harry sustained serious injuries.

Another local resident Gurpreet Singh died when a rashly driven truck hit his bike near the Golden Gate Chowk. The incident occurred four days ago. He was going to see his wife who was admitted to the hospital.

Sandeep Sunder died after his car was hit by a truck on the Amritsar-Attari bypass road. In a majority of cases, two-wheeler riders and pedestrians were most vulnerable sections that fell victim to these fatal accidents.

As per the records with the traffic police, there are 6.32 lakh vehicles registered with the local transport office in the holy city and the number was increasing day by day. Being a major religious and tourist destination, thousands of vehicles enter the city.

To handle such a huge rush, there are around 200 traffic cops and that, too, are ill-equipped to manage the affairs. A traffic cop said the traffic police also have to manage during VVIPs and VIPs movements. Harwinder Singh, Additional Deputy Commissioner of Police, said they were managing the affair with all available resources.