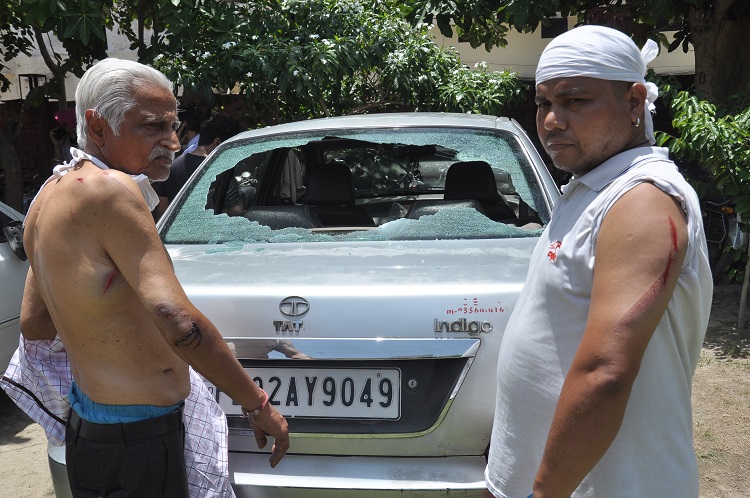 Elderly man Suresh Saggar (left) shows the injury marks and damaged car following the assault. His employee was also injured in the attack in Amritsar on Friday. Photo: Sunil kumar

A senior citizen, Suresh Saggar (76), and his family is a dejected lot. During the last one month, he suffered the third assault by unidentified persons. Even repeated complaints made to the local police in the two previous attack cases have failed to elicit a response from them so far.

In the latest incident, he was going to the Khandwala police chowki to meet cops regarding his earlier complaint, in which around four armed youths on two bikes had attacked him and his employee Raju with sharp-edged weapons on Polytechnic Road near Guru Nanak Dev University. The accused damaged his car before running away.

A complaint was lodged with the Khandwala police chowki after getting their medical examination done. Saggar was fearing for his life.

Earlier, he was attacked by unidentified bike-borne persons on the Government Polytechnic road on June 12. He had lodged a complaint with the police and also met the SHO, Chheharta police station, requesting him to file an FIR and start a thorough probe into the incident.

However, neither the police registered a case nor probed the matter which resulted in today’s attack, said Sachin Saggar, son of the victim. Before this, he had lodged a complaint with the Mahal police chowki when he was assaulted last month, but the police did not bother about investigating or even filing an FIR in the incident at that time also.

Sachin Saggar, a resident of Akash Avenue on the Fatehgarh Churian road, said his father had lodged a complaint against certain persons who had grabbed a shed in the Industrial Focal Point area by forgery causing a loss to state exchequer. “We suspect the accused had hired people to threaten us. But it would be clear only after the police hold a probe,” he alleged.

He urged the police to investigate the case and arrest the accused involved in the repeated assaults.

Investigating officer Harjinder Singh said a case had been registered and CCTV cameras in the area were being analysed to identify the suspects. “It does not seemed to be a snatching incident. We suspect personal enmity behind the incidents,” he added.