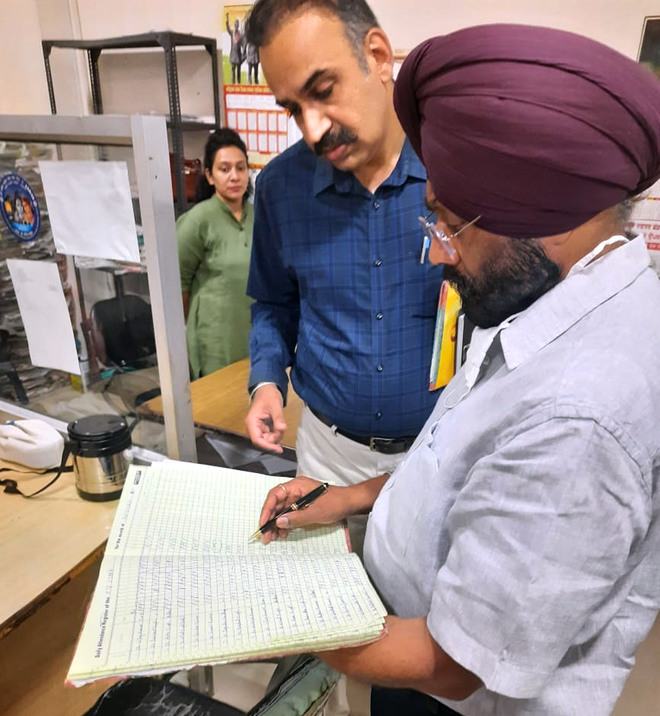 MC Commissioner (right) checks the attendance of MC employees at the Ranjit Avenue office in Amritsar on Thursday.

During a surprise checking of attendance at Municipal Corporation offices, MC Commissioner Malwinder Singh Jaggi found 96 employees absent from office on Thursday morning. On the directions of newly appointed Chief Minister Charanjit Singh Channi, the MC Commissioner along with additional Commissioner Sandeep Rishi checked the attendance of staff at various offices at the Ranjit Avenue headquarters.

There are clear instructions from the Chief Minister to ensure that government employees reach office on time so that the public doesn't face any inconvenience. Those who will not take these directions seriously will face the music. Surprise checking will be held in future too and absentees will face departmental action.

The officials started checking attendance at 9.10 am. As many as 96 employees were found absent without any prior permission from their department heads. A number of employees reached late as per routine.

Jaggi issued show cause notices to all employees who were found absent during checking. He also instructed officials and employees to reach office on time.

Soon after assuming office, newly appointed Chief Minister Charanjit Singh Channi had issued directions to the government employees to reach office by 9 am and remain available for the public till office hours in the evening.

Aiming to bring discipline in government offices Channi asked department heads to conduct surprise checks twice a week to ensure availability of officers and employees at the offices.