At 71, Jarnail Singh gives young athletes a run for their money : The Tribune India

At 71, Jarnail Singh gives young athletes a run for their money 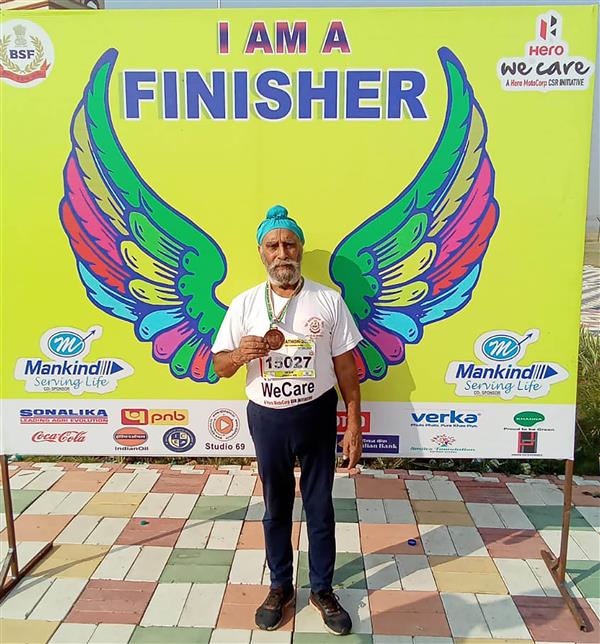 Jarnail Singh (71) continues to earn name and fame as a veteran athlete. He finished the 10-km marathon in 77 minutes, which was conducted by the Border Security Force last month.

My entire focus is on improving my running speed, which has been increasing gradually. I compete with athletes in above 40 or 50 years category as there is no upper limit. Many of the participants are almost half my age. Jarnail Singh, a veteran athlete

He clinched the third position in the 3-km walk (50 years above category) in the Kheda Watan Punjab Deyan. At an age when people battle with age-related problems, ailments and infirmity, Jarnail breaks all stereotypes. Talking to the Amritsar Tribune, he said, “My entire focus is on improving my running speed, which has been increasing appreciably. I compete with athletes in above 40 years category as there is no upper limit. Many of the participants are almost half my age.”

He has been taking part in all major veteran games for the past many years. He participated in 10-km km run in Delhi’s Jawahar Lal Nehru stadium in 2017. He performed well in th Super Sikh run – half marathon (21 km) in New Delhi in 2016 and 10th CT Half Marathon on March 5, 2017 in Amritsar. A resident of Rani Ka Bagh, he also took part in the Amritsar police’s five-km martyr run in October 2017.

In 2016, he took part in various long-distance races to test his endurance power at such a ripe age. He participated in 10-km seventh champion run held at Nehru stadium, New Delhi, besides in 10-km New Delhi Run, organised by Hindustan Arathon. He completed the veteran men’s 10.5-km walk in 01:18:14 hours in Yamuna Quarter Marathon in March.

In 2015, he participated in the 10-km walk in Karnal. He had bagged the fifth position in the 4.5 km Great Karnal Run last May.

He successfully completed the “Fastest 10-km” organised by Vikaspuri Runners on June 7, 2015, at Dwarka, Sector 11, New Delhi. He also stood first in a five-km walk, covering the distance in 32:39:06 in the veterans athletics meet, in 2014. His first stint was in the 32nd Punjab Masters Athletics Championship held at Banga in 2014.

A confident Jarnail is an inspiration for the young and veterans. Hailing from Hashimpura village in Ajnala subdivision, he shifted to the city in 1985. For him, walking is the best possible way to maintain good health.

He had taken part in 10-km walk in Karnal, Haryana, and Delhi in 2015. He had bagged fifth position in the 4.5 km Great Karnal Run at Karnal on May 31 in 2015. In the same year, he had successfully completed the “Fastest 10 km” organised by Vikaspuri Runners on June 7 at Dwarka, Sector 11, New Delhi and received the compliment of “You are an awesome runner may you run forever and do ever better”.

Jarnail’s first stint was in the 32nd Punjab Masters Athletics Championship held at Banga in 2014. He stood second in the 800-metre race.