The construction work of new roads and recarpeting of the existing ones here has been cut short. The roads within the city’s limits are looked after by the Municipal Corporation (MC), while those on the outskirts are the responsibility of the PWD, whose officials, are under tremendous pressure to complete the pending works but are facing difficulties – the available staff is proving to be inadequate considering the large-scale works that have to be carried out in and around the city. The outbreak is at the heart of the issue.

After the previous MC House was dissolved, the onus fell on the MC Commissioner Balwinder Singh’s shoulder. The first road that caught his attention was the 500 metre stretch running from Khajuri Gate till Pahari Gate. This passage was simply unmotorable and highly prone to accidents. 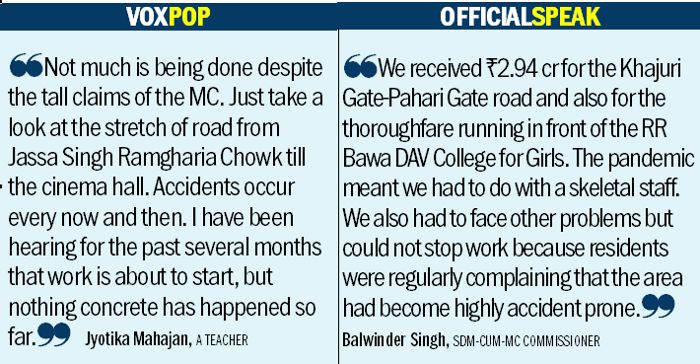 Balwinder said the road was completed under the funds sanctioned from the Urban Environmental Programme (phase-1) of the Punjab Infrastructure Development Board (PIDB). “We received a grant of Rs2.94 crore for the Khajuri Gate-Pahari Gate road and also for the thoroughfare running in front of the RR Bawa DAV College for Girls. The pandemic meant we had to do with a skeletal staff. We also had to face various other problems but we could not stop work because residents were regularly complaining that area had turned into haven for accidents,” said the SDM-cum-MC Commissioner. RK Bhatia, Municipal Engineer, was assigned the task to complete the twin projects within a stipulated time frame of two months, which he did.

He added that the MC had recently received another grant of Rs12 crore under phase-2 of the programme. “This money is being spent on improving the condition of the two service roads under the Dera Baba Nanak railway overbridge and also on some roads running through the walled city,” he told.

However, it is likely a demanding task — or so the residents claim — as scores of rehris dot the twin passages under the overbridge. “Rehriwalas are voters and no politician worth his salt will like to deprive them of their livelihood. The MC is headed by a bureaucrat but he will not commence work till the politicians direct him. Hence, the condition of these roads, which are widely used ones, will remain the same as it is now. The project is sure to be consigned to the back-burner,” said Rajinder Singh, a former municipal councillor. However, Balwinder was at variance with the views and added that the vendors will be moved to a suitable place before work commences.

Jyotika Mahajan, a school teacher, has been keeping tabs from the get-go. According to her, not much is being done despite all the tall claims voiced by the MC. “Just take a look at the stretch of road running from the Jassa Singh Ramgharia chowk till cinema hall. Accidents occur every now and then. I have been hearing for last several months that work is about to start but till now nothing concrete has happened,” she said.

Yet another passage that is suffering and in dire need of mending is the one running from Hansli bridge till Gopal Nagar. The MC Commissioner added that residents will not have to wait for long because tenders had already been floated. A senior PWD officer claimed that work will commence soon on the Amritsar bypass-Gurdwara Kandh Sahib road. “This stretch is used by devotees. Funds have been sanctioned and work will commence soon,” he said.