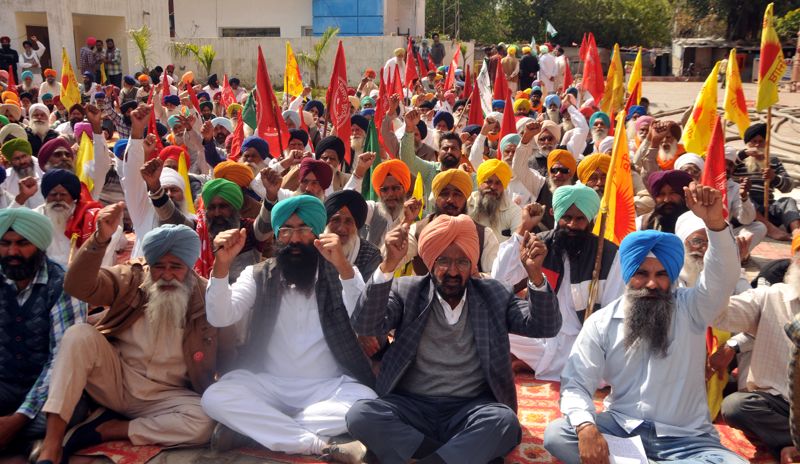 Farm unions associated with Samyukta Kisan Morcha staged a dharna outside the office of deputy commissioner here on Monday to protest against ending permanent representation of Punjab from the management of the Bhakra Beas Management Board (BBMB).

The farmer leaders stated that protest would be further intensified in the coming days by mobilising public support. The farmer leaders said the demands accepted by the Centre at the time they had ended their protest at Delhi borders are still not fulfilled.

The leaders stated that Bhakra Dam was built on Punjab’s land and now the Union Government is trying to take control of it with its new move to weaken the rights of the states.

The speakers also discussed issues as river water disputes, maintaining Punjab’s quota of jobs in Chandigarh, bringing back students from Ukraine. They also demanded that Chandigarh should be given to Punjab.

“Contesting elections or not were smaller issues. As far as interests of the state and its people are concerned, all unions are on the same page and would work jointly,” said a farmer leader.

Farmer organisations, under the banner of Sanyukt Kisan Morcha (SKM), expressed resentment over the Central Government decision on Bhakhra Beas Management Board (BBMB) and staged a dharna in front of the District Administration Complex (DAC) on Monday.

They also submitted a memorandum to the Deputy Commissioner in the name of the President of India.

The farmers called the act of the Centre to change the decade-old system a step against federalism of the country. They also demanded an adequate share for Punjab from the rivers as the state was facing acute shortage of irrigation canal water.

The leaders also discussed issues like the Russia –Ukraine war and said it should be stopped without any delay as it was threat to world peace.