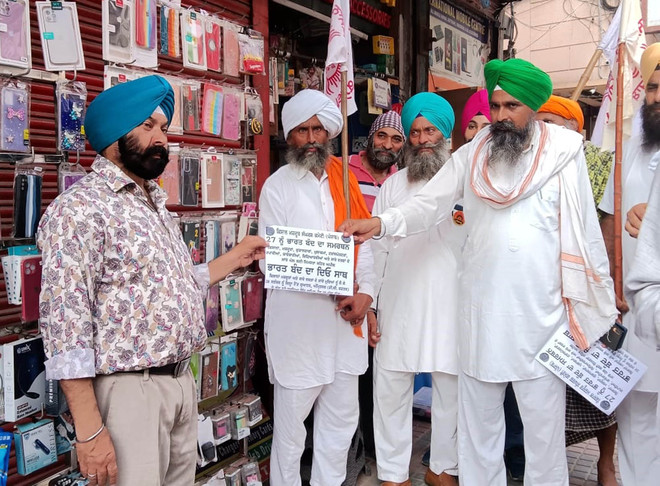 Farmers ask shopkeepers to shut down their shops to support the farmers’ nationwide strike on Monday against the Centre’s three agri laws, at a market in Amritsar, on Sunday. Tribune photo

The Sanyukt Kisan Morcha has called farmers to remain peaceful and calm during the Bharat bandh call on Monday.

The bandh, which would involve road blocks, closure of shops and rail route blocks from 6am to 4pm, would certainly disrupt public life.

The farmer leaders said the ongoing protest at the Delhi borders have completed 10 months and the Central Government under the pressure of corporate houses was adamant on not repealing the three controversial agriculture laws.

Joining hands with farmers, the arthiyas and labourers at the grain markets in the district have also decided to participate in the protest and keep grain markets closed. Apart from this, shopkeepers, factory workers and many from other sections of society would be joining, the farmer leaders said.

Rattan Singh Randhawa, a farmer leader, said: “Medical services will remain unaffected. We have instructed our volunteers to make passage for all patients, including emergency cases, at road block sites, so that they can get treatment. We have also asked them not to force anyone if someone wants to open a shop.” He said participation in the bandh was voluntary and not forced.

Farmers would be setting up road blocks on roads to Attari, Chogawan, Majitha, Ajnala, Rayya, Beas, Mehta, Tarn Taran and other destinations. The SKM leaders have appealed to the general public to participate in the protest to make it successful.

Meanwhile, the Kisan Sangharsh Committee (KSC), which is not a part of the SKM, too, has announced to block rail and road traffic at 30 points in the district. KSC leader Sarwan Singh Pandher said traffic would be blocked at the Golden Gate, Devidaspura railway crossing, Butala, Mehta Chowk, Udoke, Adda Tahli Saab, Saido Lehal, Bandala, Jaintipur, Chamiari, Ram Tirath, Khasa, Lopoke, Kathunangal railway crossing and Batala railway line among other places. The KSC members, too, have announced not to disrupt medical services. They also took out a march at the Hall Gate area on Sunday and appealed to shopkeepers to cooperate with farmers.

All arrangements in place, Cops on toes
Farmers to block Outer bypass, GT Road and some other intersections
Amritsar: In view of the Sanyukt Kisan Morcha’s call of Bharat bandh on Monday, the police have made all arrangements to maintain law and order in and around the city. Senior police officials held a meeting with farm leaders and asked them to ensure that the bandh remains peaceful. Farm unions had announced to exempt emergency and other essential services during the bandh. Amritsar Deputy Commissioner of Police (Law and Order) Parminder Singh Bhandal said, “We have held a meeting with farm leaders. Farmers will block Outer bypass, GT Road and some other roads in the city. They will allow movement of emergency vehicles and other essential services. We have constituted various police teams to conduct patrolling in the city.” Farm leaders said they would urge traders to shut down their shops in their support. They would also try to close the Central Government offices for the day. Senior police officials said they would not allow disruption in supply of milk, bread, vegetables and other essential commodities. TNS