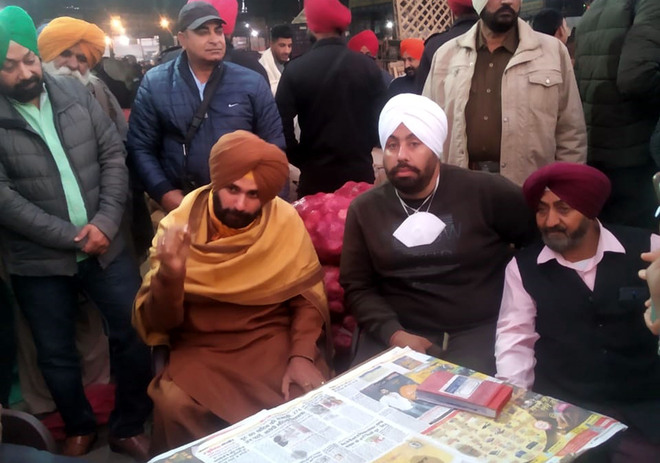 Navjot Singh Sidhu on Thursday paid a surprise visit to the Vallah Sabzi Mandi to meet arhtiyas and vegetable sellers to enquire about the rate farmers were getting for their produce and analysed its market cost.

The arhtiyas apprised the lawmaker that if the bilateral trade on the Silk Route between India-Pakistan-Afghanistan and Central Asia gets revived, the prices of vegetables would tend to be more affordable and trade would prosper.

A kg of tomato is procured from the Punjab farmers for Rs 3-5 in May by the major private players only to preserve them in cold storages. Later, it would be offered during the off season at Rs 25-30 per kg in wholesale which is further offered to the consumer for nothing less than Rs 50-60 per kg. Likewise, the potato cost too escalated from Rs 400-500 per sack to Rs 1500-1700 per sack when it reaches the market.

Sidhu emphasised that his purpose was to analyse how big private players exploit the farmers and the consumers, especially those belonging to below poverty line. He said that pulses which were Rs 55-60 per kg six months back, has touched Rs 85 a kg in October and now cross Rs 125 per kg.