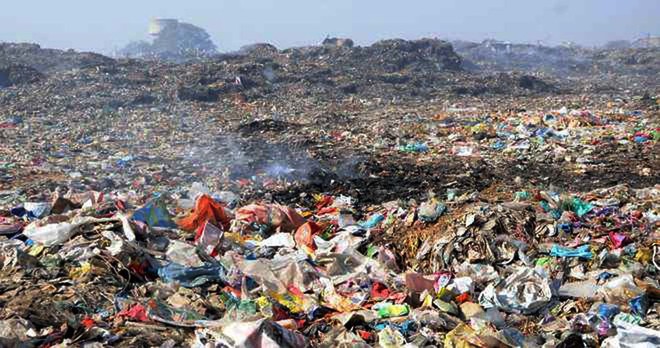 A much-hyped project of bioremediation of garbage at the Bhagtanwala dump yard by the Municipal Corporation, Amritsar, to vacate the 20-acre dumping ground failed to provide any relief to city residents. Machines installed at the dump for bioremediation have been lying defunct for several days.

MC officials claimed that the machines got damaged due to the rainy season and they had asked the solid waste management company to get the same repaired.

The MC had started the process of bioremediation of garbage at the Bhagtanwala dump in 2020 with a hope to remove heaps of garbage within two years by processing the same.

The solid waste management company, MSW, hired by the MC, has been initiating bioremediation of garbage at a snail’s pace. They are using trimble machines and ballistic separators to segregate the waste. There is around 15 lakh MT of garbage on the site.

As per the MC’s plan, the company is supposed to vacate six acres of land within the first six months. Afterwards, they are supposed to set a plant to convert garbage into green coal. However, no plan has been implemented yet.

Sanjay Sharma, an activist of the sangharsh committee against dump said: “Instead of removing the garbage, the government has piled up more waste during the past few years. The SAD government had vacated a few acres adjoining residential localities. But the present Congress government dumped organic garbage near localities to decompose it. We are residing in hell-like conditions. The promise to shift the dump was not fulfilled by the Congress government. Bioremediation is mere an eyewash. The company installed the machines but did not operate them. They vacate some areas by burning garbage in the name of accidental fire. Bioremediation is not a solution, the authorities should shift the dump.”

The civic body had started dumping waste at Bhagtanwala in the 1990s, on around 20 acres of ground adjoining the grain market. Residents of Bhagtanwala had been demanding to relocate the dump yard since 2006. A sangharsh committee had hit the ground in 2014 and stopped the protest after getting assurance from senior Congress leaders before the 2017 Assembly elections. Capt Amarinder Singh had assured at Bhadarkali Mandir that the dump yard would be shifted and the point was also mentioned in the Congress election manifesto. Manpreet Badal promised to construct a chest hospital on the vacated land of the dump.

Bioremediation is one of the major components of the Swachh Bharat Abhiyan and the National Green Tribunal (NGT) had also directed the civic body to initiate bioremediation of garbage in 2019. Despite tall claims, the MC failed to get any significant result from the process so far.

Dr Saurab Chawala, municipal health officer, said: “The machines have got some technical issues. These company will resume its operations soon.”

Machines installed at the dump yard for bioremediation have been lying defunct for several days. MC officials claimed that the machines got damaged due to the rainy season and they had asked the solid waste management company to get the same repaired.