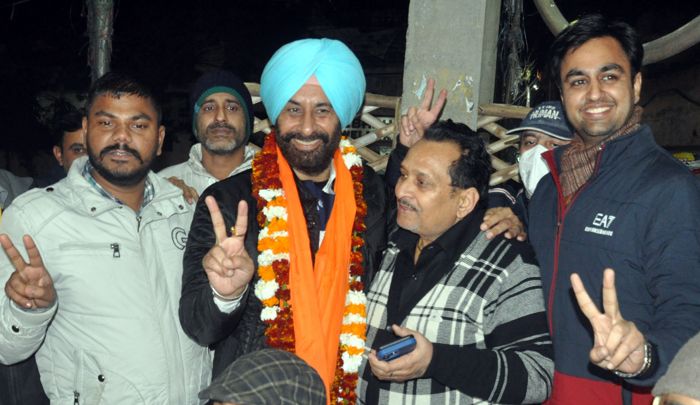 Sukhminder Singh Pintu shows the victory sign with his supporters after he was declared Bharatiya Janata Party candidate from the Amritsar North constituency on Friday. Photo: Sunil Kumar

With the BJP announcing a first-timer, Sukhminder Singh Pintu, as their candidate from the Amritsar North constituency here on Friday, it is likely to witness a four-cornered contest from here.

Pintu has been among the strong supporters of Anil Joshi and enjoys a solid support base in the constituency. However, Joshi later joined the SAD after he was expelled by the BJP for anti-party activities for openly supporting the farmers’ agitation in Delhi.

He remained a municipal councillor from Ward No.51 two times (in 2007 and 2012) while in the previous MC elections in 2017, the ward was declared reserved and hence his mother contested the poll and is currently a sitting municipal councillor. In 2012, Pintu had won the election by a big margin.

Amritsar North constituency is considered a strong Hindu belt while the SAD never had any strong base here.

Suresh Mahajan, district BJP president and one of the aspirants for the party ticket from here, said every party worker would be standing with Pintu shoulder to shoulder and they would campaign in his favour with all available resources to ensure his win.

“Party is supreme and it has given the responsibility to Pintu and we are standing by him,” he said. About the party’s prospects from here, especially against Anil Joshi, he said the party had a strong cadre in the constituency. He expressed hope that the BJP would win from the seat by defeating other rival candidates. His supporters were elated and danced to the beat of dhols, besides distributing sweets after his name was announced during a press conference by the party high command in Delhi.

Meanwhile, Navreet Singh Safipur (55), who has been declared a BJP candidate from the Tarn Taran constituency, is the first-time contender. He belongs to a farmer’s family of Safipur village in Tarn Taran. He would fight against three-time MLA Harmeet Singh Sandhu of the SAD, present MLA Dr Dharambeer Agnihotri of the Congress party, Dr Kashmir Singh Sohal of the AAP and Dr Sukhmandeep Singh Dhillon of the SSM. Navreet Singh did his graduation from the local SGAD Government College.

He entered the BJP fold with the initiative of former BJP leader Anil Joshi who joined SAD after his expulsion from the party last year. He was appointed the district president from 2013-16. He got premature retirement from the post of branch manager of Co-Operative Bank. He is considered a humble leader as compared to other candidates. The Tarn Taran constituency is considered a Panthic seat, which had not even a single municipal councillor or a sarpanch, block samiti or Zila Parishad member from the BJP.