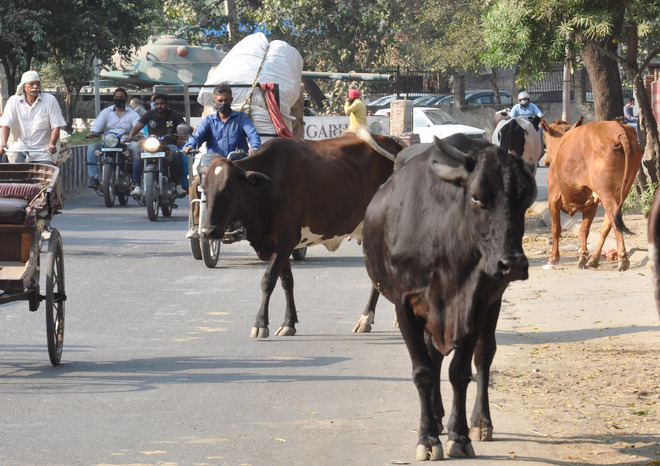 Civic body officials claim that due to insufficient recovery of cow cess, the welfare of cows is suffering.

Though the Punjab Government is levying cow cess on various products, it is not being released to the Municipal Corporation of Amritsar (MCA) for the welfare of cows. The MC is getting cow cess only from the Transport Department, which is insufficient to take care of more than 5,000 cows that roam city roads and streets.

The state government has been levying cow cess on the purchase of liquor, fuel, cement and some other items since 2016. Ironically, a small share of the cess, being collected by various departments, is deposited in the MC’s account.

As per the official data, the civic body has received only Rs1.34 crore as cow cess from the Transport Department from 2016 till date. With this money, the MC provides fodder to stray cows and takes care of cattle in their cattle pond. Even a gaushala is being constructed in the Nariangarh area using these funds.

Mayor Karamjit Singh Rintu said, “Only Transport Department is depositing its share. The cow cess, being collected by several other departments of the state government, has not been released even once since 2016. We take care of cows using this cess. A gaushala is being constructed at a cost of Rs 93 lakh. If the government releases the funds, we will make better look-after arrangements for cows.”

Civic body officials claim that due to insufficient recovery of cow cess, the welfare of cows is suffering. The MC has a cattle shed with a capacity of 30 animals, which is insufficient. The proposed construction of gaushalas by the district administration is still a distant dream. Meanwhile, the MC general house also cleared the raising of two more gaushalas to accommodate 600 head of cattle in the Naraingarh area last year, but the project has yet to see the light of day. Though a large number of cow shelters are being run by religious organisations and individuals, cows are not getting proper care they need.

The initiative, supported by Netflix, aims to identify, cele...