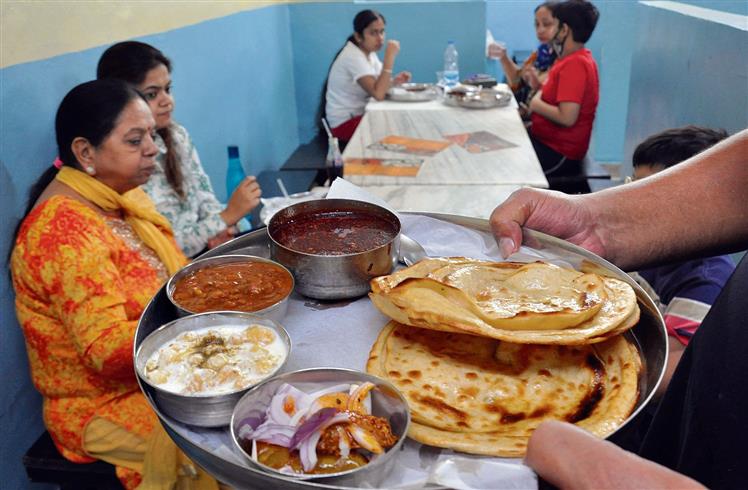 Tribune lensman Sunil Kumar takes you through the busy streets of Amritsar this World Food Day, which falls today, charting the city’s sumptuous, traditional dishes and favourite food destinations that are a part of the holy city’s food heritage, making it a global food destination. Tickle your taste buds by taking a pictorial tour of the city’s mouth-watering dishes.

Kesar Da Dhaba is one of the most iconic destinations of the city. Started by Lala Kesar Malin in 1916 at Sheikhupura, Pakistan, the dhaba shifted to Amritsar post Partition. Its traditional dal makhni, prepared in huge brass and bronze utensils overnight, has a loyal fan base not just in India, but in foreign countries as well.

Giani Tea Stall at Queens Road is the most favoured morning tea and breakfast joint. Its visitor list includes CM Capt Amarinder Singh, Navjot Sidhu and Bollywood actors Rishi and Ranbir Kapoor. Its age-old recipe of tea served with kachoris, butter toast and omelette is something to die for. Run by Gurmeet Singh, the joint was opened by his grandfather in Lahore and later shifted to Amritsar.

Makhan Fish, established in 1962, is the best place in the city to try the buttery Amritsari fish fry. A recipe that has been featured on National Geographic and Lonely Planet, apart from several other food shows, its fish preparations have become synonymous with Amritsar’s food reputation. Beera Chicken serves the taste buds of a typical Punjabi. Decades-old recipes of this tandoori chicken joint have featured in national as well as international food magazines and travel shows.

A Dash of sweetness

Gurdasram Jalebiwala at Katra Ahluwalia has been serving piping hot jalebis for around 100 years. The shop has been built over an old well and is also known as khuh wali jalebi. Sweet lassi is served in a steel glass topped with a spoonful of cream and kesar. Several shops, serving lassi and phirni inside Katra Sher Singh, are a part of the city’s food heritage.