Broken railings at bridges a threat in foggy weather 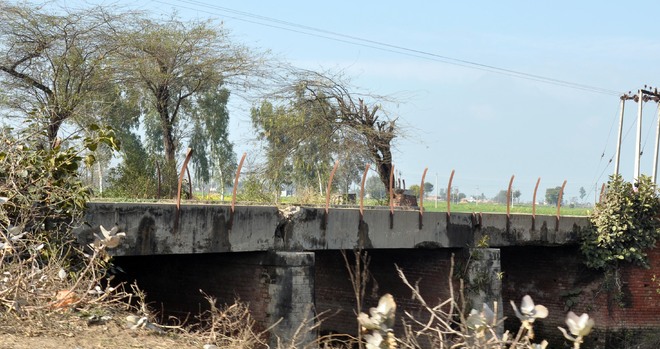 Railings of most of the bridges in rural areas are broken in Amritsar.

The broken iron grills at drains and nullahs in rural belt of the district are posing a threat to the lives of motorists in foggy weather. The government has failed to replace these broken iron grills, exposing its apathetic attitude towards public safety.

Most of the villages in the border belt of Amritsar and Tarn Taran districts are connected to other villages by bridges over drains and nullahs. However, a visit to some areas reveals that the safety iron grills are missing or broken.

In the foggy season, these broken and missing iron grills pose a threat to the lives of commuters. “The railings can save a vehicle from falling into a drain and save the lives of vehicle occupants,” said Balkar Singh, a resident of Dhanoa village.

The iron grills at the bridge over the nullah near Serai Amanant Khan are missing from half of the portion. Moreover, in the absence of any white markings on the road, the chances of vehicles falling into the nullah multiply at night.

“The grills were broken after being hit by vehicles over the years. But now if a driver fails to spot the bridge, there are greater chances of the vehicle falling into a nullah,” said Gurdev Singh, a resident. The bridge over a drain at Buchar village does not have the proper safety grills.

In September 2016, seven schoolchildren were killed and 20 others injured as a rashly driven school bus fell into a drain near Muhawa village. The bridge did not have any safety railings, which could have stopped the bus from falling into the drain.

Residents of border villages say that the broken railings have never been repaired by the government. “The repairs should be done soon so that major accidents can be avoided in future,” said another resident.