Passengers faced inconvenience at the bus stand as buses remained off road in Amritsar on Thursday as well.

The public transport buses remained off road for the second consecutive day on Thursday, as the outsourced and contractual employees of the Punjab Roadways and Punbus are protesting seeking regularisation of their services and timely disbursal of salaries.

The employees alleged that they have notreceived salaries for the last two months.

The members of the Punjab Roadways Contractual Employees’ Union said the protest would continue till their demands were not accepted. The union also complained that the government had planned to appoint 1,337 employees on contract even as the employees employed earlier were demanding regularisation. The protesters complained that their salaries were not being disbursed on time.

The employees said those who were laid off recently should be employed. They alleged that they had high hopes from the new government, but it was harassing employees unnecessarily.

Meanwhile, passengers bound for their destinations faced inconvenience at the bus stand here. The protest resulted in overcrowding of private buses because of which passengers had to face a tough time. Female passengers who get the facility of free travel, too, could not avail the same in the absence of government buses.

Staff up in arms in Tarn Taran too

Tarn Taran: On the second day of the indefinite strike call given by the Punjab Roadways Punbus/ PRTC Contract Workers’ Union, only 12 of the 71 buses of the local depot came on roads causing much inconvenience to passengers. The situation was critical as most of the buses which were plying were overloaded. 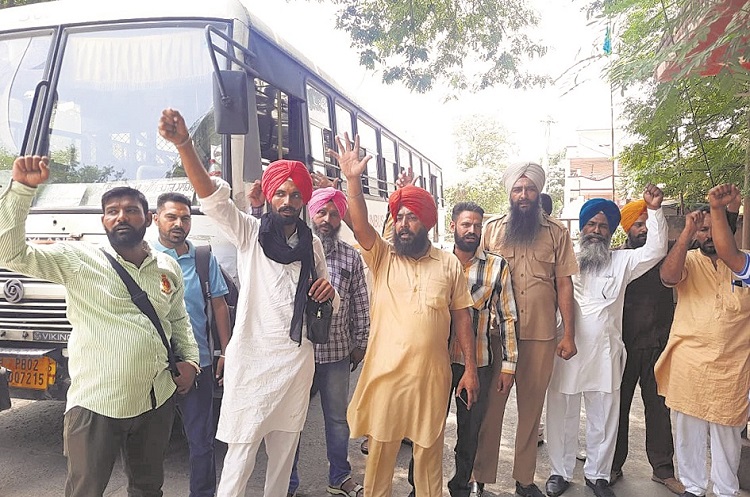 The agitating employees held a gate rally at the roadways workshop under the leadership of Satnam Singh Tur, president of the depot. Tur said the organisation had been demanding for regularisation of services who had been working under contractual conditions with meagre salary. He demanded to withdraw the adverse reports issued against the erring employees and regularise their services as they had served for more than 10 years in the department. He took serious note of not releasing the salaries for April month till date. He warned the state government that in case the demands were not met, the organisation would have no option but to intensify the agitation for an indefinite period. The employees raised slogans against the state government. The contractual employees of the Patti depot, too, observed strike on Thursday. OC