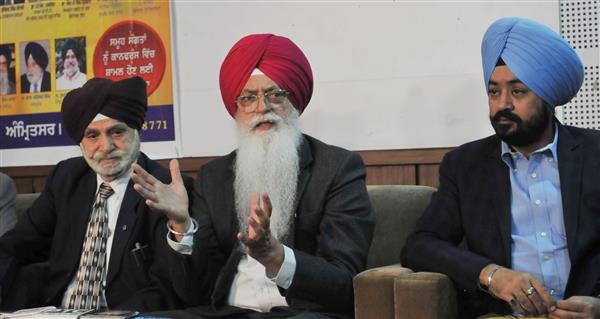 Dr Nijjar also issued an apology in a video message. He said he choose wrong words to convey a message with right intent.

While interacting with the media in Amritsar on Wednesday, Dr Nijjar called out landlords and farmers on their reluctance for crop diversity. While trying to make a point regarding the need for crop diversity and dwindling groundwater level, he said: “Punjabiyan toh bewakoof kaum koi ni (There is no community stupider than Punjabis).”

Meanwhile, he said farmers of Punjab had become complacent and comfortable with the wheat-paddy cycle and choose to use groundwater, without any consideration for switching to canal water. “During our childhood, we used canal water for irrigation. Now, the landlords and farm owners use groundwater through tubewells and motors that keep on running without any check,” he said. While he also talked about several issues, this particular bit invited sharp criticism from several quarters.

The three-day conference will be held at Sri Guru Harkrishan International School, D-Block, Ranjit Avenue from December 3 to December 5.

Cabinet Minister Inderbir Singh Nijjar, and president, Chief Khalsa Diwan, said a number of dignitaries including scholars, intellectuals, society leaders and religious personalities will address the conference. “We are putting efforts to spread awareness and all-round development of the Sikh society, which is much need of the hour,” he said.

Santokh Singh Sethi and Sarabjit Singh Chhina said an exhibition on environment and natural resources, books on Sikh history and paintings will be displayed, tanti saaz (string instruments) and armour (shastra) will also be put on display. Agriculture and organic farming exhibition will be inaugurated at 1:30 pm on inaugural day of the conference.

Focus of the event will be to conduct seminars on various topics, including Bhai Vir Singh’s life and philosophy, significance of agriculture and organic farming, women empowerment, role of women in Sikh religion etc. “SEES”, a docu drama on Guru Teg Bahadur will also be staged.