Security beefed up; many organisations preferred not to burn effigies due to the ongoing Covid pandeminc and dengue cases 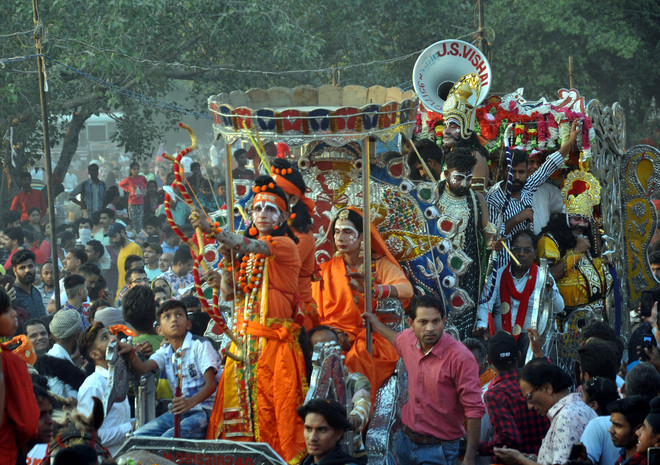 Ramlila artistes take part in the Dasehra celebrations at the Durgiana Temple ground and residents watch the effigies of Ravana, Meghnad and Kumbhkaran go up in flames in Amritsar on Friday. Photo: Sunil Kumar

Even as the police remained on toes for providing security at various places, where Dasehra festival was being celebrated and effigies burnt, many committees organising programmes during celebrations preferred not to do so keeping in view the security threat and health crisis created by the ongoing Covid pandemic and spread of dengue.

Permission was granted for burning effigies at four spots where programmes were held peacefully without any untoward incident.

Deputy Chief Minister Om Parkash Soni lighted an effigy at the Durgiana Temple Dasehra ground while former Deputy Chief Minister Sukhbir Singh Badal did so near Trillium Shopping mall. This programme was organised by former Cabinet minister Anil Joshi, who joined SAD recently, after he was expelled by the BJP for speaking in favour of farmers’ agitation against the three controversial farm laws.

A member of Dasehra organising committee, near Mata Bhadra Kali Temple, near Khazana Wala Gate, said they decided not to organise any programme in view of the Covid pandemic and dengue in the holy city. Similarly, the Panch Rattan Krishna Temple Committee also did not organised any programme on the occasion of Dasehra.

Parminder Singh Bhandal, Deputy Commissioner of Police, Law and Order, said an alert was sounded following seizure of explosives near the international border. Security was tightened in the city, Bhandal added.

“Permission was granted at four places where ADCP rank officer was entrusted the job of providing fool-proof security. Anti-sabotage teams and sniffer dogs were pressed into service. Areas around the four spots were thoroughly checked. Security was also provided at these sites in the night so that no anti-social elements could create trouble,” said Bhandal. Besides, security was also beefed up around religious shrines and vital installations, Bhandal added.