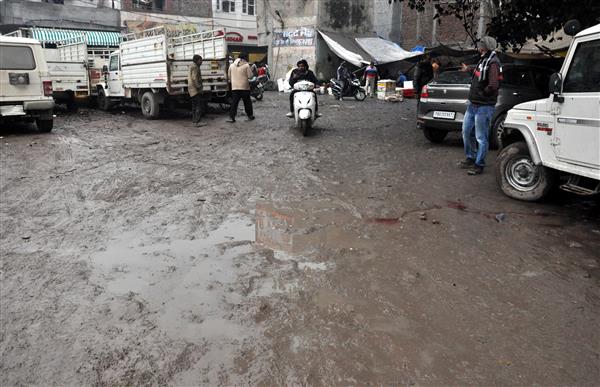 A road in a pathetic condition near Chitra Talkies in Amritsar. Photo: Sunil Kumar

Potholed roads, choked sewer lines, waterlogging in low-lying areas, poor garbage lifting and sanitation, etc, are not finding a mention during the poll campaigns of five urban constituencies in the city.

Residents face these perennial issues throughout the year and often complain to the authorities concerned about choked sewer lines and bumpy roads.

The political parties and leaders are targeting each other on sand mining, drug trade and corruption during the poll campaigns.

Road infrastructure, water supply, sewer lines and sanitation are not even being mentioned in the poll campaign material and posters. Roads are crying for repairs and choked sewer lines is a regular affair in densely populated areas but public representatives are not even discussing these issues.

Successive governments have failed to upgrade city infrastructure with time. The grants by the Central and state governments were used on several unproductive projects in the past.

“The local issues are being ignored during door-to-door election campaigning. The road that links Daburji and Sultanwind is in a pathetic condition. Several localities do not have a trace of sewer lines and water supply. The political parties are making tall claims to change the face of the whole city, but fail to revamp a two-kilometre road stretch during five years,” said Ravinder Singh, a resident of Sultanwind area.

“The number of vehicles on city roads has been increasing with each passing day. There is no proper public transport in the city having a population of 12 lakh. City dwellers have to spend hours in traffic jams. No political party and leaders have the vision to address the issue. They are discussing trivial issues during TV debates. The problems which are being faced by the residents regularly are not being taken in the campaign,” Harkirshan Singh, a resident.