Cleaning during inspection takes Railway Board team by surprise 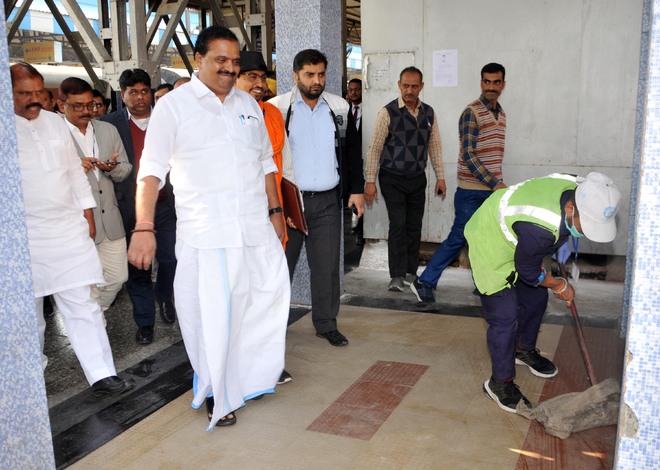 Members of the Passengers Amenities Committee of the Railway Board inspect the railway station while a safai karamchari cleans the premises in Amritsar on Monday. Tribune Photo: Vishal Kumar

Members of the Passengers Amenities Committee (PAC) of the Railway Board were surprised on Monday to see workers cleaning the city railway station during an inspection.

The six-member PAC, led by its chairman PK Krishnadas, arrived at the railway station for inspection around 11.30 pm and stayed there for over two hours. Some members could not hold their emotions and smiled after seeing workers carrying out the cleanliness work during the inspection.

During the visit, the chairman of the PAC hinted that efforts were on to hand over the local railway station to the Indian Railway Stations Development Corporation (IRSDC) for its proper upkeep and maintenance.

When asked about re-construction of the dilapidated Bhagwan Mahavir railway overbridge (ROB), popularly known as Rego bridge, he said the Railways had already given an NOC for its reconstruction.

The issues of inadequate parking space and lack of potable water at the railway station’s Gol Bagh side were brought to his notice. He was also told about half-hearted implementation of releasing token numbers to ticket-seekers under the Tatkal scheme.

G Premendar Reddy, a member of the PAC, said they came to know about the shortcomings and strong points of the railway station after the inspection. He said safety was a concern as the entire complex was not properly enclosed within the wall. Reddy added the good point was the availability of a scanner at the railway station.

A delegation of taxi drivers led by Manjit Singh met the PAC members and apprised them of the issues being faced by the taxi drivers, especially space problem.

Manjit said, “There are 60 licence holder taxi drivers who have been dutifully paying a licence fee of Rs1,200 per month to the Railways. Now all of a sudden, we have been asked to restrict ourselves to 60m area, where only 10 taxis can be parked. Earlier, we had given adequate space where over 50 taxis could be parked.” Delegations of potters and the Uttar Railway Mazdoor Union also met the PAC members.