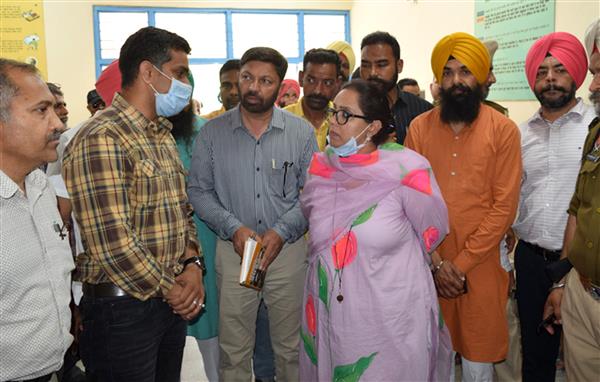 Jeevan Jyot Kaur, AAP MLA from Amritsar East, during a visit to a government hospital at Verka, near Amritsar, on Tuesday. Photo: Vishal Kumar

Ahead of the Chief Minister’s oath-taking ceremony, the Aam Aadmi Party legislators on Tuesday visited government institutions, especially hospitals, to know about the shortcomings and to gain first-hand experience about the problems being faced by the public.

At Community Health Centre, Verka, Amritsar East MLA Jeevan Jyot Kaur took stern notice of the cleanliness and hygiene. She pointed out that while the washroom for the staff was neat and clean, the other for patients had broken floor tiles and faulty electric fittings.

“What I find most disturbing is that the washroom for the staff was locked so that no one, except them, uses it and the other one meant for patients was unusable,” she said.

The MLA said though the employees have listed their own problems such as shortage of manpower and infrastructure, she feels that lethargy and indifference were some other issues that needs to be looked into.

Citing an example, she said the room where newborn children are shifted immediately after birth had dust on everything. “Dusting does not take much manpower or infrastructure. If these minor things need supervision, it means there is lack of dedication and responsibility,” she said. She noted that the beds did not have bed covers and pillows.

Later at Verka milk plant, she said the MC had allotment of around 100 booths pending that would be given to eligible youth to make them self-employed. She asked the staff to work with dedication.

At Verka police station, a resident complained about police inaction after two months of filing a complaint. On this, she asked the officials to immediately address the issue and change their attitude towards the general public. She warned that indiscipline or misbehaviour would not be tolerated at any cost.

Meanwhile, Amritsar West MLA Dr Jasbir Singh, too, visited Bhai Himmat Singh Satellite Hospital in the Chheharta area and said shortcomings in infrastructure and manpower would soon be done away with. He also asked the hospital staff to be punctual and treat patients with humility. He said doctors and other employees should be polite while talking with patients.

Amritsar: Three AAP MLAs — Dr Jasbir Singh Sandhu, Kunwar Vijay Partap Singh and Dr Inderbir Singh Nijjar —interacted with renowned doctors of the city. The event was organised by physician Dr Navpreet Singh. Dr Jasbir Singh said he had been a part of the local medical fraternity for the last 15 years and knows the problems being faced by doctors. He said he chose public life as he wanted to serve public in a better way. Kunwar Vijay Pratap Singh also thanked the public in general and medical fraternity in particular for placing trust in the AAP. “We will do everything to live up to the expectations of the people,” he said, adding that he left government job as he could not work under corrupt politicians any more. Dr Ashok Uppal, Dr HS Nagpal, Dr Pardip Ohri, Dr Tarun Beri, Dr RS Boparai and others from the medical fraternity were also present. TNS