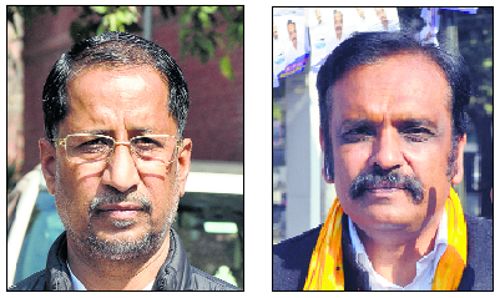 Amritsar North — one of the keenly-watched constituencies in Punjab — is headed for a close contest between SAD and AAP, while the Congress appears to be losing its ground here.

The constituency was having a four-cornered contest after SAD and BJP parted ways during these Assembly poll. Anil Joshi had a strong support base among people here and even claimed that many of the BJP supporters were still with him.

Kunwar Vijay Partap Singh cast his vote at a polling booth at Manav Public School here. He reached around 10am. Speaking to the media, he appeared confident and said there was a mood of change among people.

“This is not an ordinary Assembly election, but a public movement to bring a change in Punjab. People are voting for the betterment of the state and end the mafia rule from here,” he said. On the allegations against AAP national convenor and Delhi CM Arvind Kejriwal of colluding with separatist forces, he said those who themselves are anti-national were levelling such allegations and people of Punjab know their cheap tactics.

While greeting voters, Anil Joshi along with his family members cast their votes at Government Medical College. While talking to The Tribune, he said people would vote for development. “People know how much development work I have carried out when I was the Cabinet minister. I believe people will vote for the face and contestant rather than looking at symbols,” he pointed out.

He said parting ways from the BJP would not have any impact as people know his work. “I left the party (BJP) cadre and started from scratch after joining SAD. You can see the face of people who have faith in me,” he said.

“Those who know Punjab’s culture and language can make it a hasda vasda Punjab,” he said, while pointing towards AAP leaders.

It was a pleasant surprise when sitting MLA Raj Kumar Verka contesting from Amritsar (West) greeted Kunwar Vijay Partap Singh. Verka had also came to cast his vote at the same booth. They exchanged greetings.