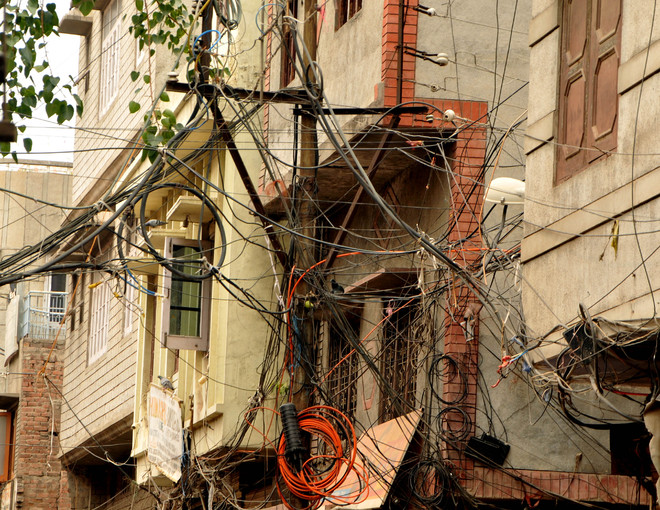 A web of electricity wires hangs overhead in a street in Amritsar on Monday. Photo: Vishal Kumar

The tangled power lines hanging off the electricity poles and nearby transformers can prove as ugly to one’s dear life as they look. These cobwebs of wires not only are a threat to general public but also one of the biggest stumbling block in the beautification of the holy city.

Apart from the old city areas, the same scenario can be witnessed in the recently developed modern localities which hints that newer ways of electricity transmission have not been explored.

An eye sore for sure, they also add to the trouble of power corporation technicians who have to spend double the amount of usual time when rectifying a power snag. With the load at its peak during the summers, the risk of a major mishap arising out of a possible short circuit also two-folds as the wires get heat up abnormally. Notably, in most of the fire accidents, the short circuiting of wires acts as a catalyst.

Balkar Singh, a local resident, said, “In market places many street vendors do their business by setting up temporary stalls under the poles while a bunch of loose wires hover over their heads. If only these are systematically managed, it would look good as the authorities are trying to convert our city into a smart city.”

The concerned residents also stated that all the tall trees touching overhead supply lines should be pruned as these might pass on electricity especially during monsoons.

A junior employee with power corporation said, “With a huge number of connections from each electricity pole, we often get muddled up. In case of a snag we have to check all the wires,” he said, before adding, “The condition is more worrisome in the walled city areas which have a dense population.”

Satnam Singh, a resident of Guru Bazar, quipped, “In walled city area the leads are entangled in such way that if you throw something from the rooftop, it would not reach the ground and get stuck in wires.” He also said that live wires running to the windows of the first floor have caused many accidents. “People have to keep their windows closed or else a child might touch them,” he added.

There are suggestions flying around that underground supply in areas should be adopted where it is possible and a smart system to provide power connections could solve the problem. “Atleast in new localities being developed, the new techniques of electricity supply could be adopted,” said Janak Kapoor, another resident.