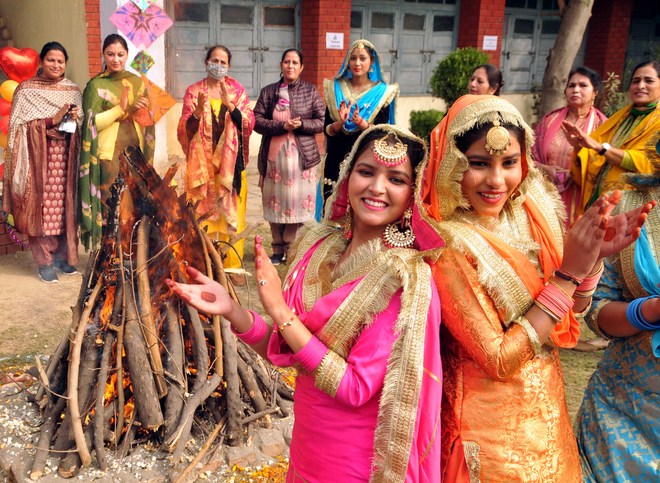 Students of Shahzada Nand College perform giddha on the occasion of Lohri in Amritsar on Wednesday. Tribune Photos

Severe weather conditions proved to be no deterrent to youth who took to flying kites to celebrate Lohri, on Wednesday.

Residents celebrated the festival with traditional gaiety and fervour. Prohibited synthetic string was also used in flying kites. The youths also did not mind risking their lives by coming over to roads to fly kites.

While residents relished ‘Rauh (sugarcane juice) di kheer’ to mark the occasion, youngsters and children danced to the beats of drums and DJs apart from participating in kite flying contests.

However, the practice of demanding Lohri (Lohri mangna) was missed in the city as the tradition has been dying down with the passage of time. The elderly people recalled their days of yore. They reminisced going from door-to-door singing folk songs and demanding Lohri in the form of til (sesame) seeds, peanuts, jaggery, gajak, rewri and money.

“With the passage of time, this practice has got confined to the lower economic stratum,” said Manjit Singh, an elderly.

In evening, bonfires were lit in streets where families gathered and celebrated Lohri by sharing ‘gur’ and groundnuts with each other.

The police continued with their drive to book persons for using the banned kite string. However, the deadly string is being sold here in ‘clandestine’ manner with the support of society at large.

An event to celebrate Lohri with newborn children was organised at Jallianwala Bagh Martyrs’ Memorial Civil Hospital on Wednesday.

Civil Surgeon Dr Charanjit Singh and other senior officials were present on the occasion. Dr Singh said the function to celebrate Lohri of the girl child was organised to give a message to society that girls are not less than boys in any way.

The Child Welfare Department also organised an event at Kurmania Bal village, near Attari, and honoured the mothers of 10 newborn girls. Child development project officer Kuldeep Kaur Bamrah said a positive change has started coming in society and apart from government departments and NGOs, even common people have started celebrating the Lohri of girl child.

A festival to mark the celebrations was also organised at DAV College. Students performed bhangra to mark the occasion. The teaching, non-teaching staff, NSS volunteers, NCC cadets and hostellers participated in the event with zeal and enthusiasm.

College principal Dr Rajesh Kumar congratulated the students, teachers and other employees for organising the community celebration of the Punjabi festival.