Seek waiver of tax for pandemic period, increase in fare 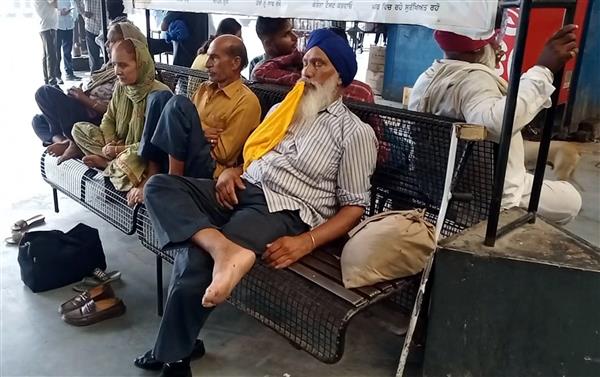 Passengers face inconvenience at the bus stand as private bus operators hold a protest against the state government in Amritsar on Tuesday. Photo: Vishal Kumar

Private bus operators in the district went on strike today against the alleged failure of the AAP government to fulfil their demands, including waiver of tax for the Covid-19 pandemic period.

The protesters raised slogans against the state government. With private buses off the roads, commuters faced a lot of inconvenience. Passengers had to rely on state-run buses like Punjab Roadways, PEPSU and PRTC to reach their destination.

Pivate bus operators said despite the government promising to waive off the tax of the last four months of 2021 due to Covid-19 losses, the same had not been done yet.

They said the ongoing free bus service to women in the state-owned buses had also hit their businesses. They also sought a hike in the existing bus fares in the state.

Palwinder Singh, a union leader, said if their demands were not met then they would keep their operations closed across the state till August 14.

Police personnel were deployed in and around the Shahid Madan Lal Dhingra Inter-State Bus Terminus. Some roads were blocked around the ISBT where the protesting bus operators had parked their buses.

A commuter, Jasminder Kaur, said she came here to board a bus to Dasuya to meet her relatives there. However, no bus was available. Even reaching the bus stand was a difficult task.

In Tarn Taran, all private buses, including mini-buses, remained off roads on Tuesday, causing great inconvenience to the passengers.