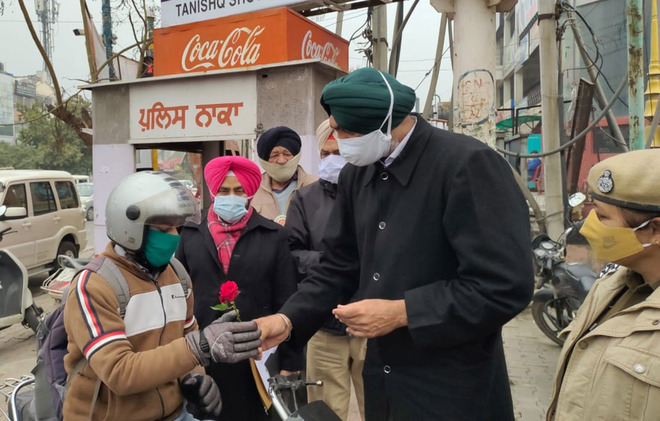 ADC PS Bhandal hands over a rose to a commuter. Tribune Photo

Parminder Singh Bhandal, Additional Deputy Commissioner of Police, (traffic) was also present on the occasion. He urged the people to follow the traffic rules in letter and spirit for their own safety. The police also distributed pamphlets to the commuters sensitising them to traffic norms.

Bhandal said while on roads, people should behave like responsible citizens. By violating traffic rules, such as jumping red lights and over speeding, they were not only risking their own lives but also endangering the lives of other people. He said the people should also wear helmets which is mandatory as per law.

He said the major cause of road casualties was due to head injuries. People could reduce this number (of casualties in road mishaps) by simply following traffic rules and wearing helmets.

Meanwhile, the police along with the NGO Voice of Amritsar, today pasted stickers on the backside of the vehicles included tractor trolleys, auto rickshaws and horse carts during a camp outside Jahajgarh area near Ram Talai Chowk. The association members including Nita Mehra, Dr Rakesh Sharma, Seenu Arora and Dr Jaspreet Grover, were present.

The association members said the association had printed around 2,000 sticker reflectors which were to be pasted on the backside of the vehicles in an effort to reduce road mishaps during dense foggy season. — TNS