At Guru Nanak Dev University, student organisation, Students for Society, gives a call for boycott of classes and holds a protest 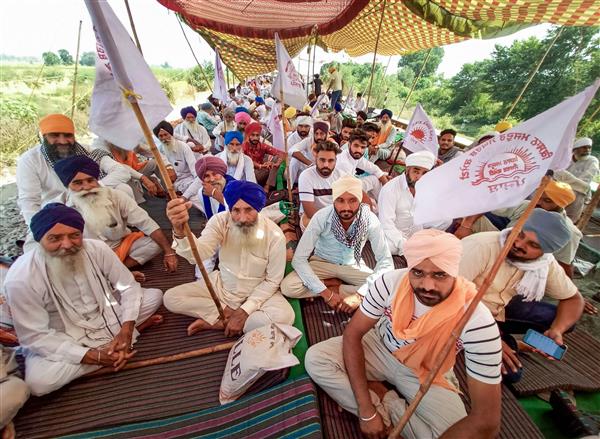 The farmer unions blocked most of the rail and road routes leading to the city during the Bharat Bandh protest on Monday as a result of which the public faced inconvenience.

The bandh call received a huge response in rural areas as markets were completely closed. In the city, the farmers staged a road block at Golden Gate while several marches were taken out to appeal to the shopkeepers to keep their shops closed.

The farmers also held protests in nearby towns Ajnala, Baba Bakala, Rayya, Kathunagal, Attari, Chogawan, Majitha, Chehharta and Jaintipur. At Devidaspura railway crossing, the farmers removed their clothes to protest against the government.

Railway officials said the routes of several trains had been diverted. Besides farmers, other sections of society also observed the bandh. Many schools and colleges suspended teaching. At Guru Nanak Dev University, the student organisation, Students for Society, gave a call for boycott of classes and held a protest.

Gurdaspur: A complete bandh was witnessed in Gurdaspur and Batala.

Office-goers faced inconvenience as all modes of transport remained off the roads.

The Gurdaspur-Batala and Gurdaspur-Pathankot national highways were blocked. However, ambulances were allowed to ply.

Gurdaspur SSP Nanak Singh stationed himself at the Babri by-pass where the cops had set up an impromptu check post. He said nearly 500 policemen were put on duty to ensure there was no untoward incident. “As many as 17 points have been identified where trouble can take place. Adequate security arrangements have been made at these sites,” he added.

In Batala, SKM activists blocked traffic at Gandhi Chowk and also near VMS educational institute on the Batala-Amritsar road.

Farmers pitched a tent on the rail tracks near Mandi Chowk in the process blocking the Gurdaspur-Dinanagar-Pathankot road. Similarly, a tent was pitched on the Gurdaspur-Sri Hargobindpur road near Sathiali bridge. Police had been deployed near the bridge.

Satbir Singh Sultani, general secretary, Punjab unit of the Kirti Kisan Union, is the main coordinator for the SKM in this district.

Batala SSP Ashwani Kapur said farmers were holding protests at 19 different points in the town. “We have covered all these sites. There has been no trouble till now,” he said.