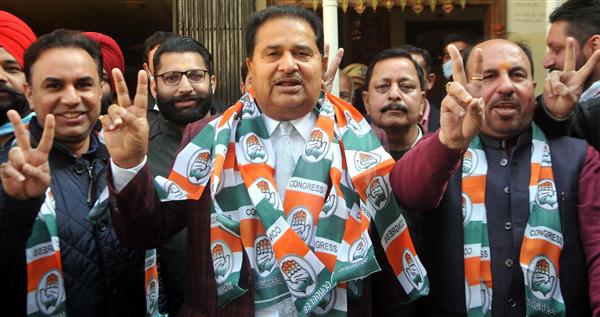 Wealth of Deputy CM Om Prakash Soni, who filed nomination papers from the Central Assembly seat, has been growing like his political graph since he entered the fray.

A look at his assets mentioned in the affidavits submitted with the Election Commission count him among the affluent candidates. Contesting against former BJP minister Baldev Raj Chawla’s son Dr Ram Chawla and AAP’s candidate Dr Ajay Gupta, Soni is considered to be a heavyweight.

After remaining the Mayor of the city, he debuted in the Assembly election from the Amritsar West in 1997 and won the elections thrice in a row till 2007. He moved to the Central seat following the announcement of west as a reserved seat. Soni had shown his assets worth Rs 1 crore in the affidavit filed in 2007, in 2017, his movable assets were shown to be Rs 48.56 lakh and that of his wife was Rs 56.09 lakh. This year his movable assets have reached 72.50 lakh and his wife’s movable assets have reached Rs 1.02 crore. Similarly, Soni had immovable assets worth Rs 11.74 crore and wife Rs 5.50 crore in 2017. This year, his immovable assets are Rs 16.98 crore and wife’s movable assets are Rs six crores. His wife also has an ancestral property worth Rs 2 crore. Both of them did not buy any gold from 2017 to 2022. However, as per the affidavit filed in 2017, his wife has 1.5 kg gold and he has 750 grams of gold. His wife also owns two-carat diamonds.

However, cars in his inventory have gone down this year. He has only one Toyota SUV, valued Rs 7 lakh. In the last election, he owned a Toyota Crown luxury car and a Honda Accord. PLC candidate Harjinder Singh Thekedar and some independents filed their nomination papers from different Assembly segments.