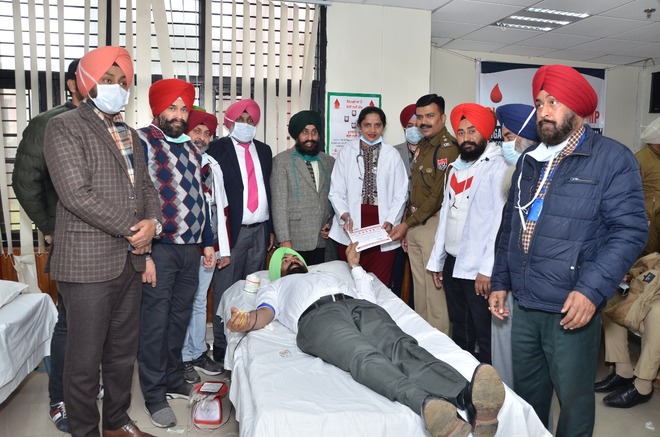 DC Kulwant Singh (quite left) and the SSP (only in police uniform) in the blood donation camp in Tarn Taran. Photo: Gurbaxpuri.

Tarn Taran: Police personnel of the district donated 550 units of blood at a camp organised in association with the Red Cross Society here on Wednesday. Women personnel also donated blood. It was Deputy Commissioner Kulwant Singh and SSP Dhruman H Nimbale who were among the first donors after the inauguration of the camp. The donors also included SPs, DSPs, SHOs, in-charges of police posts and other police staff working in offices. SSP Dhruman H Nimbale said the district police had offered to donate 1,000 units of blood but keeping in view the maximum monthly requirement of the Red Cross Society, only 550 units could be collected in the camp. Addressing on the occasion, the Deputy Commissioner and the SSP said blood donation was the highest form humanitarian service which could save the life of a human being in the hour of need. The donors were given certificates by the SSP. OC

Amritsar: The district on Wednesday reported two deaths due to the Covid-19 contagion, pushing the toll to 567. The deceased have been identified as 82-year-old Prem Dass (82) of Azad Nagar (Chheharta) and 62-year-old Madhu Bala (62) of Chabal Road. The district health authorities reported 24 new cases, taking the total count to 14,765. The new cases include 12 influenza-like illness cases and 12 contacts of positive patients. Meanwhile, with the recovery of 35 patients, the recovery rate has risen to 14,051. At present, the district has a total of 147 active cases. TNS