Despite ban, kite fliers use Chinese string on festival 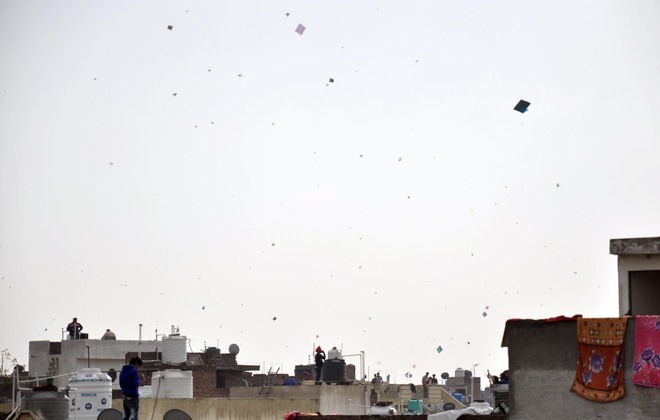 People fly kites on the occasion of Maghi in Amritsar on Tuesday. Photo: Sunil kumar

Though the city police have registered several cases for illegal sale of the banned Chinese thread (for kite flying) and seized rolls, there was no let-up in its use on the festival. Questions were being raised over the role of the administration and the police as a large number of people, including children and youngsters, used banned plastic and synthetic string to fly kites during the Maghi celebrations on Tuesday.

It has been learnt that the banned string is being sold in the city. A number of pedestrians and commuters were seen getting entangled in thread of banned Chinese string on various city roads. Even a commuter injured his eye due to plastic string on Majitha Road. Several pigeons were reportedly died and injured.

A pigeon was rescued by environmentalist PS Bhatti. The pigeon was reportedly trapped in Chinese string on the Queen’s Road. It is learnt that the kite string left several persons injured in the last few days after they came in contact with it. The Chinese string is hard to break and could easily cut skin. Parkash Singh, a resident, said, “It seems more people used the banned string this year. Bunches of used string have been found from every nook and corner of the city.”

“It is the responsibility of the government to direct the authorities concerned to ensure implementation of a complete ban on usage of such harmful string for kite flying. Besides injuring humans, the plastic string injures birds as many people use it just to enjoy kite flying,” said advocate Kuljit Singh, another resident. — TNS