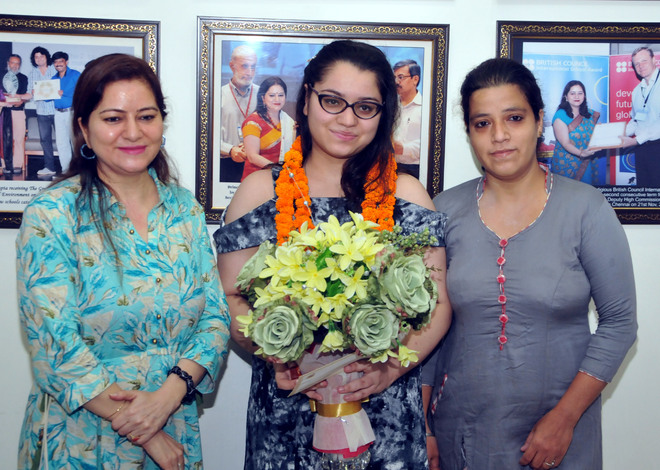 All smiles: Diya Khanna (C) of DAV International School with the principal of the school (L) and her mother. Diya scored 99.2% marks in humanities and bagged top position in the city. Tribune photo

Diya Khanna of DAV International School and Bhavya Shingari from DAV Public School topped the district in humanities with 99.2 per cent marks. She scored 100 per cent in music and painting and 99 per cent in economics, psychology and political science. She scored 98 per cent marks in the compulsory English subject. She had scored 97.6 marks in Class X.

She wished to pursue mass media from abroad and join broadcasting as a career. Talking about her career choice, she said, “I am more into creative things. I like to write poetry. I am curious to learn new things which guided me to choose journalism as profession.”

Her father Kapil Khanna, a businessman and mother Dolima Khanna, a businesswoman, also seemed to be happy with her performance. They said they always aimed at supporting Diya in her career pursuits and she gave her best. Diya acknowledged the effort of her school for supporting her throughout her.

Hetal Arora of Spring Dale Senior School topped the school as she scored 99 percent in humanities and was second in the district in arts stream. She said: “It was undoubtedly an overwhelming feeling. My heartfelt gratitude goes to my family, my teachers who were constantly there for me as my torch bearers, entire school management.”

This journey wasn’t easy for her as she had lost her father two years back and she missed his presence at this point of time more. She added that her mother has been her support all these times. “I can still visualise how she motivated me through every phase of my life.” She was grateful to her teachers who made her realise that she had this very potential in her. She wanted to pursue higher studies in psychology.

Bhanvi Khanna from DAV Public School and Pardeep Singh from Khalsa College Public School came third in the district by scoring 98.6 per cent marks. A visibly elated Pardeep thanked his parents and family members for supporting him to achieve the marks. He said his aim was to become a civil servant so he had chosen humanity group after clearing matriculation.

Sri Guru Harkrishan Public School’s Bhavjit Singh Kesar got 98 per cent marks. He was grateful to the faculty for helping him understand nuances of various subjects.