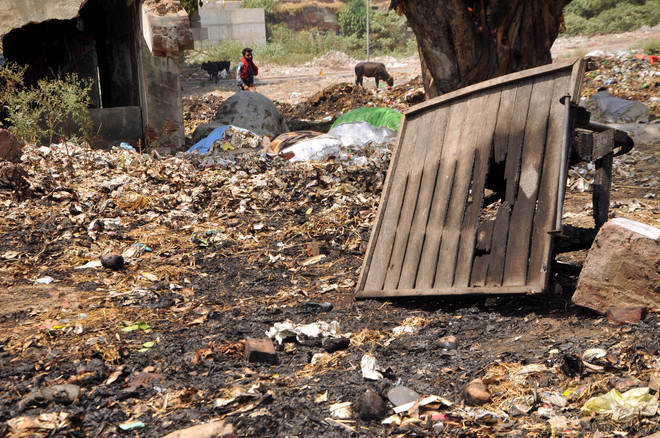 Combustible refuse dumped in the sabzi mandi was one of the reasons that led to fire outside Hall Gate in Amritsar. vishal kumar

A fire broke out at an abandoned portion of sabzi mandi, outside the Hall Gate, on Saturday, at around 7.30 in the evening. The fire lasted for about 15 minutes after which the fire tenders arrived and doused the fire.

Meanwhile, the shopkeepers said the combustible refuse being dumped in the sabzi mandi was one of the reasons that led to fire. The waste, after unloading of fruits from trucks, is not disposed of carefully. Shopkeepers said as many as seven trucks of papaya come from Gujarat and three to four trucks of bananas come from Maharashta and Karnatka, everyday. The rest of the fruits comes from Vallah Mandi.

Each truck contains nearly 8,000 pieces of papaya and each piece is wrapped in newspaper. Besides, they also throw the straws used as cushion in apple baskets and broken wooden boxes which keeps lying unattended. All these together make refuse a combustible material.

These fruits are then stored in about 300 shops situated near the old sabji mandi and the waste is dumped in its adjoining open ground. Later, hardly any government agency lifts it, they rued.

The shopkeepers were of the view that the timely rain had saved the fire from slipping out of hand as strong winds could have spread the fire to the adjoining markets.

They said the authorities did not shift out the fruit market along with vegetable market from the city. The old sabzi mandi was shifted to new market at Vallah area in 2004. Since then the site has been lying unused and residents turned it into a garbage disposal site.

Though a few fruit shops continue to operate from a portion of the old mandi, a major portion of the site is being used by people to throw garbage and waste generated at their commercial establishments.

Residents of the nearby areas and shopkeepers say the foul smell keeps raising a stink. The problem exacerbates after rains. Stagnant water is a common site where mosquitoes breed and the situation gets aggravated during monsoon.

Many a times, several private public transporters also use the open ground to park their buses.

Mayor Karamjit Singh Rintu said a proposal was forwarded to the House of the Municipal Corporation to raise a multi-storey parking at the abandoned land. He said efforts would be made to expedite the matter.