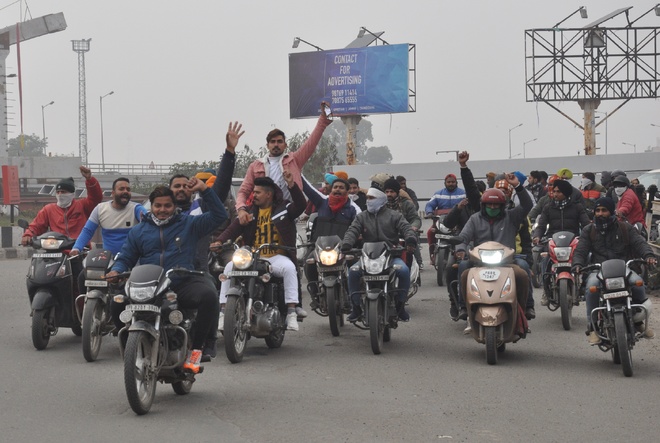 Up in arms: Delivery boys of an online food firm raise slogans against the company in Amritsar on Sunday. photo: sunil kumar

Delivery boys of an online food company, Zomato, on Sunday raised slogans against the company for trying to fix duty hours for them and the government for failing to protect them from robbers.

They took out a motorcycle rally and passed through various parts of the city to mobilise support. They said one of the delivery boys was recently attacked with a sharp-edged weapon on the elevated road and was robbed of his mobile phone and Rs 4,000. They said two months ago, another delivery boy was robbed near Bhagtanwala Dana Mandi when he was returning home at night.

They said delivery boys were vulnerable as everybody knew that they carried cash and owned expensive mobile phones. However, the reality was that they came from economically weaker families and had to commute from place to place for deliveries to earn a livelihood.

They urged the police to provide them security as many of them were looted while on way to deliver orders at night. Meanwhile, delivery boys of private company also raised slogans against the company for trying to fix duty hours without paying them any fixed salary.

They said post lockdown the online food delivery company drastically reduced their incentives. For instance, they used to be paid Rs2,000 in the first week of the month, Rs4,000 the next week and more after the delivery of 60 orders per week.

On the other hand, the company imposes a high penalty on them in case of missing of an item. They claimed that they tirelessly worked during the Covid-19-induced curfew and even later, but even then, their wages were slashed without any reason.

They said the company provided them insurance of Rs 1 lakh in case of death and permanent disability which was very insufficient.