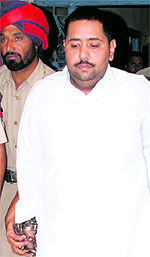 The police have arrested former MC councillor Gurwinder Singh, alias Vicky Kanda, and recovered an illegal weapon from his possession. Kanda was held along with Pawandeep Singh, alias Raju at a check point.

During their search, the police recovered a weapon, two magazines, five live cartridges, two mobile phones and a scooter. The duo could not produce any documents related to the weapon.

Several criminal cases, including kidnapping, extortion, drug peddling and murderous assault, had been registered against Kanda, who has close links with the ruling party leaders. He’s currently out on bail. In 2013, he was arrested by the police for allegedly kidnapping and attempting to murder a property dealer.

Deputy Commissioner of Police (Investigations) Mukhwinder Singh Bhullar said the investigation was underway to ascertain the source of the weapon.

Kanda was produced before the Duty Magistrate who sent him on two-day remand. The Deputy Commissioner of Police (Investigations) said Kanda got the weapon from a gangster and further investigation was under progress.