Pal Singh died in a scuffle with the Excise Dept team during a ‘raid’ at his house; 12 persons booked 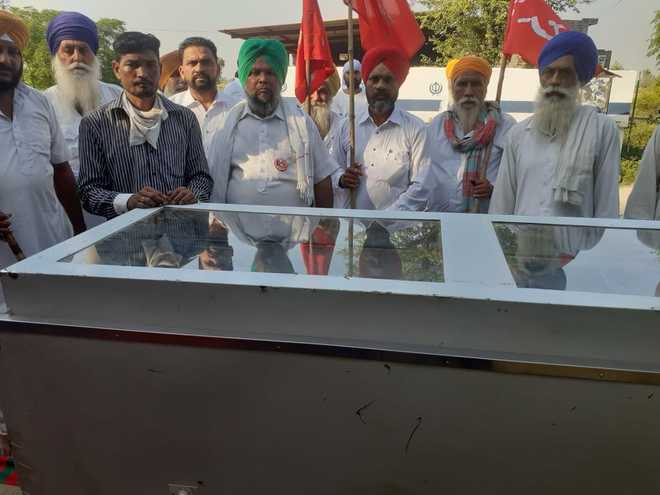 The family of Pal Singh protest with his body in front of the Kang police post on Thursday. Photo: Gurbaxpuri

Taking serious note of the death of Pal Singh (62), a former sarpanch of Kallha village, the family members and certain social organisations sat on a dharna in front of the Kang police post with the body demanding the arrest of the accused responsible for his death.

The protesters also demanded a compensation of Rs10 lakh for the victim’s family.

Pal Singh, member of a Dalit community, died in a scuffle with the team of the Excise Department and the associates of the wine contractors at his residence on Wednesday after they came to conduct a raid.

As many as 12 persons have been booked under Sections 302, 452 and 149 of the IPC by the Goindwal Sahib police on Wednesday. Seven of them have been identified as Jatinder Singh, Excise Inspector; Sarwan Singh; Jagir Singh, both ASIs, Excise Department; Sahib Singh Head Constable; Maninderpal Singh Constable; Inderjit Singh, Wine Contractor; and Mukha Singh, helper of the contractor. Five of the other accused are yet to be identified. The Excise Department team had gone to the village to conduct a search operation regarding some objectionable material to manufacture illicit liquor.

Dharminder Singh, son of the deceased, said the Excise team members entered their house to search some objectionable material for manufacturing illicit liquor, when his father Pal Singh objected to it. There was a verbal duel between both sides, which led to a scuffle. Pal Singh fell unconscious on the ground and was brought to a local private hospital, where doctors declared him dead.

Dr Swaranjit Dhawan, SMO at the local Civil Hospital, where the post-mortem was conducted by a board of doctors on Thursday, said the post-mortem was videographed. He said the board of doctors included Dr Sandeep Kalra, Dr Neeraj Lata and Dr Harpreet Singh. The SMO said the viscera of the heart and other sensitive parts of the body has been sent to the forensic laboratory in Kharar and the exact cause of the death would be cleared after the report is received.

Members of the Kisan Mazdoor Sangharsh Committee Punjab, Jamhoori Kisan Sabha and Dehati Mazdoor Sabha protested with the family. Preet Inder Singh, DSP Goindwal Sahib, reached the spot and held talks with the protesters but the issue has not been resolved so far. Jaspal Singh Chabal of Jamhoori Kisan Sabha, Baba Balaka Singh of Kisan Mazdoor Sangharsh Committee, Punjab, and Baldev Singh Pandori of Dehati Mazdoor Sabha said they were demanding the arrested of the accused and compensation for the family.