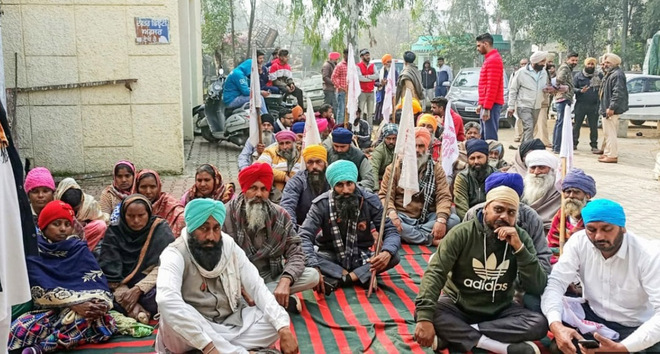 Members of the Kisan Mazdoor Sangharsh Committee during a demonstration at Jandiala Guru in Amritsar on Saturday. Tribune photo

Activists of the Kisan Mazdoor Sangharsh Committee on Saturday held a dharna over police inaction outside the Jandiala Guru Police station here.

Satnam Singh of Dhard village said on Friday night he had a narrow escape when several persons of the village fired at him. He said those attacked him were Jagroop Singh, Ajmer Singh and Gurbhej Singh. He said he used to work as a JCB machine operator.

Satnam said he had a dispute with them over digging of earth, besides some monetary dispute. He said he had lodged a complaint with the police around a month ago in this regard.

Dayal Singh Mianwind, a member of the Kisan Mazdoor Sangharsh Committee, said the police visited the spot but failed to take any action against the suspects which forced them to hold the agitation.

Ajmer Singh and Jagroop Singh said they also ran a dairy in the village. They said on Friday Satnam’s son Taran along with his accomplices attacked them, besides ransacking the dairy and now he was making baseless allegations.

Harchand Singh, Station House Officer, Jandiala police station, said investigation was under progress and appropriate action would be taken. He said the police found no truth in Satnam Singh’s statements but the probe was on.