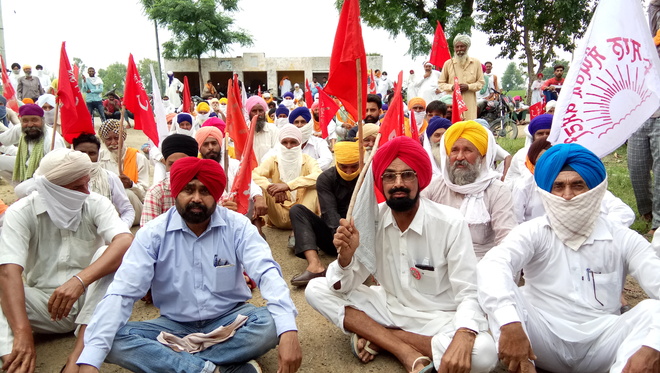 Farmers stage a dharna in front of the residence of Khemkaran MLA Sukhpal Singh Bhullar in Mehmudpur village on Monday.

Farmers under the banner of All-India Farmers’ Coordinating Committee staged a dharna at Mehmudpur village on the Indo-Pak border here on Monday. They were asking for the fulfilment of their demands. They staged dharnas in front of the residences of Congress MLAs.

They took out a motorcycle rally in the village and staged a dharna outside the residence of Sukhpal Singh Bhullar, MLA from Khemkaran. Addressing on the occasion, Prithipal Singh Marimegha, Master Daljit Singh Dayalpura and Sucha Singh Ladhu, leaders of different organisations, condemned the Union Government for issuing Ordinances regarding the farming sector.

Farmers of this area also marched up to the office of local MLA Dr Dharambeer Agnihotri and submitted a ‘warning letter’ to his PA as the MLA was diagnosed with the Covid-19 disease and under treatment.

Addressing on the occasion, Pargat Singh Jamarai and other leaders said the ordinances issued by the Union Government would not safeguard the farming community and workers. He said by implementing the Electricity Bill 2020, the Modi-led Union Government was going to take over the power department from the states and would bring it under its control. After subjugation, the power plants would be sold to private companies and farmers would not get free power.