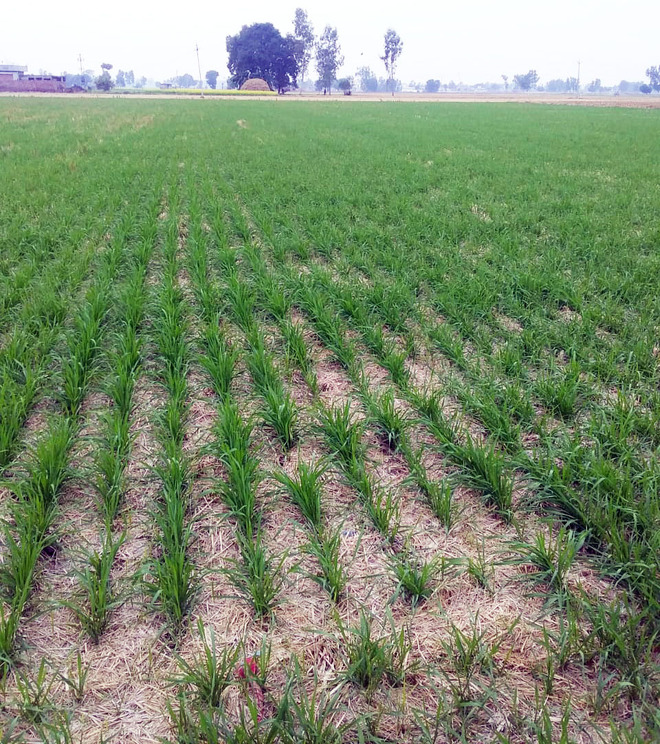 A view of a wheat field in Amritsar. Tribune photo

A large number of farmers are forced to sow the seeds of the wheat crop again as the earlier sown seeds were damaged due to heavy hailstorm and rain during the first week of the month. The farmers said the seeds did not germinate due to more moisture content in the soil. They said sowing again had increased their input costs.

They said even wheat sown late gave less yield. “Farmers are facing loss on two counts. First, he has to spend Rs 3,500-4,000 on sowing the crop again. Second, the wheat sown now would have less per acre yield,” said Kuljeet Singh Malawali, a farmer.

“The farmers need around 40 kg of wheat seeds, which costs around Rs 1,400-1,500. As the fields need to be ploughed again to break the soil hardened by water, at least Rs 1,000 are required for diesel alone. In case the farmer uses seed drill for sowing, the expenses made on it too are roughly Rs 1,000. The labour cost is additional,” he said.

Malawali said, “A loss of 1.5 quintal is usually witnessed if the crop sowing is delayed by one week. Now, when the sowing has been delayed by two-three weeks, it is expected that estimated per acre loss would be around four quintals.”

The season had not been particularly good for the agrarian community as they had suffered losses due to crash in prices of basmati varieties post Diwali. “The Prime Minister makes claims of doubling farmers’ income, but instead it has dropped due to bad weather and government policies,” said another farmer Gurnam Singh, adding that the government should come up with a comprehensive crop insurance to compensate farmers hit by natural calamities.