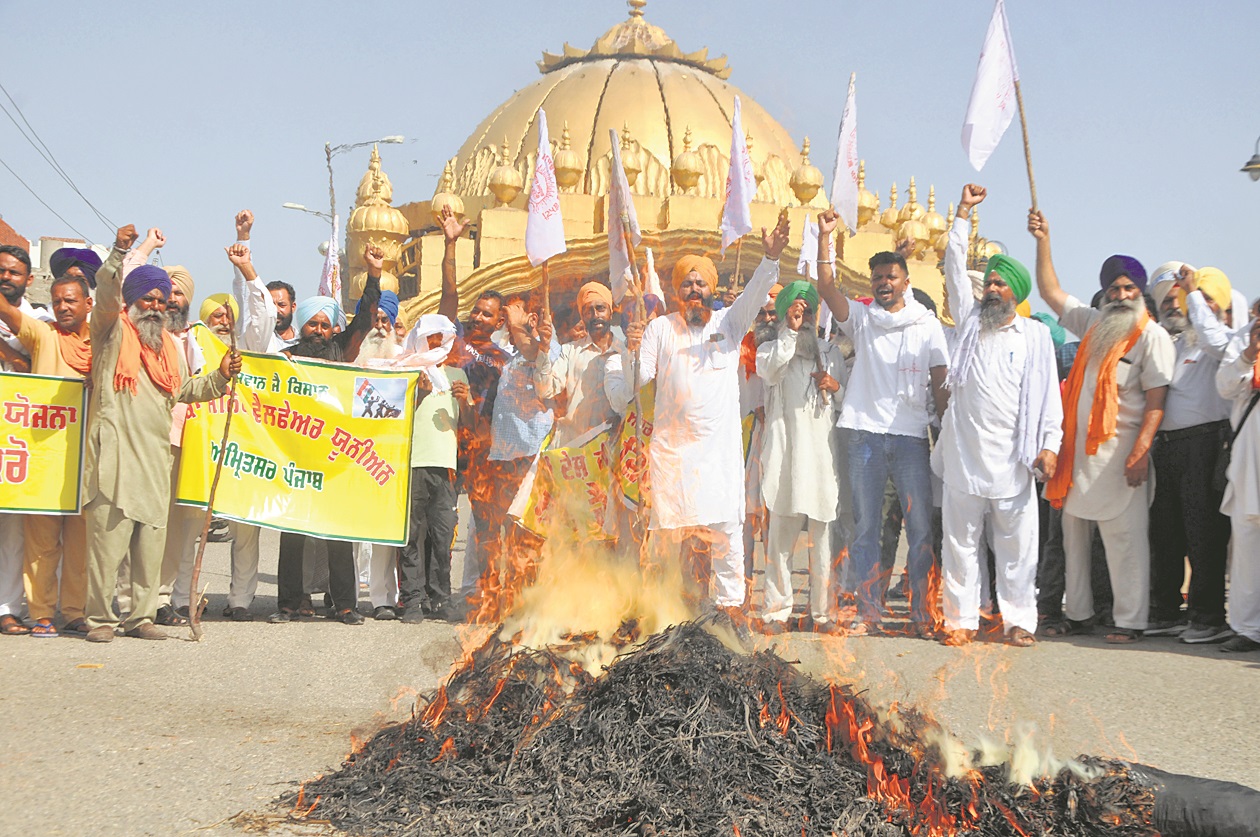 Farmers burn an effigy of PM Narendra Modi during a protest against the Agnipath scheme. Vishal Kumar

Protesting against the Agnipath scheme, members of the Kisan and Mazdoor Ekta Union took out a march near the Golden Gate and dubbed the Central Government’s scheme as anti-people and anti-youth. The protesters also burnt an effigy of Prime Minister Narendra Modi. The farmers alleged that political parties were ruining the future of the country’s aspiring soldiers.

Farmers’ leader Swaran Singh Pandher said farmers and other organisations held similar protests opposing the Centre’s Agnipath scheme all over the state. “The country has not benefited from any of the Centre’s policies whether it is denomination, coal policy or now Agnipath scheme,” said Gurvinder Singh Chabba, one of the farmer union leaders, who led the protest.

He said with no pension and only four years of service, the youth would be left in the lurch without any skills for any other line of work. “They would not be able to get any benefits of the Army service, which is demoralising,” he said.

Tarn Taran: Various farmer unions, labourers, youths, human right activists and other sections of society registered their protest by holding rallies in different parts of the district against the Union Government’s Agnipath scheme here on Friday.

They submitted memorandums to the President through the Tarn Taran Deputy Commissioner and the SDM demanding the rollback of the scheme without delay.

Workers of the Kisan Mazdoor Sangharsh Committee, Punjab, organised protests on National Highway No.54 near Rasulpur canal and at Chabal. Sukhwinder Singh Dugalwala and Dhanna Singh Lalughuman were among others who addressed the gathering on the occasion. Leaders of the committee said the scheme was introduced to ruin the future of the youth who would be jobless after four-year service. The leaders held the Union Government responsible for introducing wrong policies, which were providing little job prospects to youth.

Workers of the Bharti Kisan Union (Ekta Ugrahan) under the leadership of Gurbaj Singh Sidhwan, district president of the union, held a demonstration in front of the District Administrative Complex (DAC). They also submitted a memorandum to the President through the Deputy Commissioner. Jathedar Santokh Singh Patti, press secretary of the union, said the union in the memorandum submitted to the President called upon the Union Government to fill all vacant posts with full pay scales.

The farmer unions affiliated with the Sanyukt Kisan Morcha took out a rally against the Agnipath here and presented a memorandum to the SDM.

The Guardians of Governance (GoG) in a district-level meeting organised here on Friday condemned the Union Government for launching the Agnipath scheme, which would not only increase unemployment but also cause a lapse in the security of the country. Col Amarjit Singh Gill, district head of the GoG, presided over the meeting. While addressing on the occasion, Subedar Hardeep Singh and others said the Agnipath scheme was not beneficial for any section of society. He demanded the withdrawal of the scheme without delay. — OC