Farmers irked over not getting MSP on moong in Tarn Taran

Say no official of govt agency was present in grain market 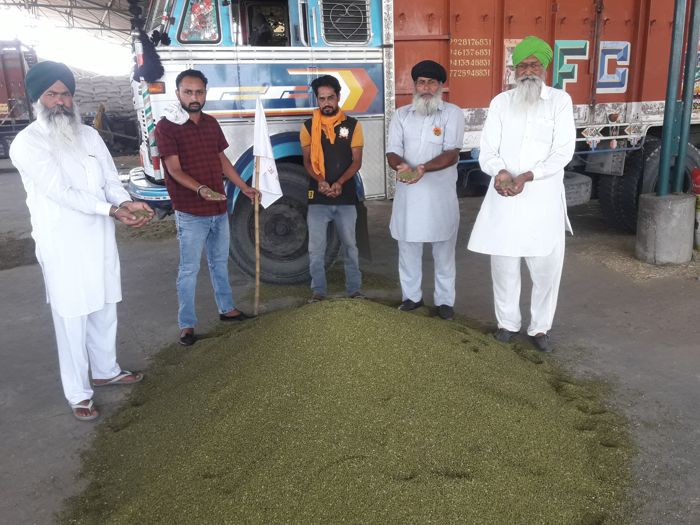 Farmers with their produce of moong at a Tarn Taran market on Wednesday. Photo: Gurbaxpuri

Farmers are a disturbed lot as they are not being given the MSP on the moong produce in the local grain market. They said there was no procurement being done by government agencies leaving farmers at the mercy of private firms. Moreover, the produce was lower this year — around one fourth of what procured in previous years.

It is worth noting here that a few days ago, Chief Minister Bhagwant Mann during a meeting with farmer organisations announced to give Rs 7,275 as the minimum support price (MSP) on moong per quintal. Markfed had been made the nodal agency for the procurement of the moong crop.

As there was no official of any government agency to procure moong, farmers had to sell their produce to private firms at a rate below the MSP declared by the state government.

Piddi village farmer Nirmal Singh’s produce was procured at a rate of Rs 6,275 and that of farmer Supreem Singh of the same village bought for Rs 6,280 per quintal by private firms. The produce of other farmers was also procured at rates ranging from Rs 6,270 to Rs 6,280.

Fateh Singh, leader of the Kisan Mazdoor Sangharsh Committee, Punjab, said tall claims of the state government had fallen flat. There was neither any official of the Markfed agency in the market nor Market Committee officials to make it sure that the MSP was given to the moong-producing farmers.

Harjot Singh, District Mandi Officer (DMO), denied receiving information of the arrival of moong in the market or not receiving the MSP on it by farmers.

Fateh Singh said, “The farmers are feeling cheated. The yield too has reduced to one fourth due to the unseasonal heat early in the month of March.”