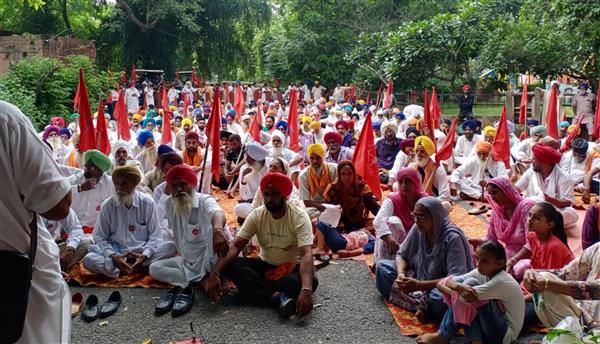 Farmers under the banner of the Kirti Kisan Union (Punjab) staged a dharna at Company Bagh here on Sunday to protest against GST on food products. They also took out a march from Company Bagh to Hall Gate.

Union president Hardev Singh Sandhu said, “The government has imposed GST on at least 90 items because of which the food for poor has become costly. Due to high inflation, the poor are already facing it difficult and now five per cent tax will add to their woes.”

The govt has imposed GST on at least 90 items because of which the food for poor has become costly. Due to high inflation, the poor are already facing it difficult to make both ends meet and now five per cent tax will add to their woes. —Hardev Singh Sandhu, union president

Union general secretary Rashpal Singh Kapurthala said the government was also running away from fulfilling its promise to provide MSP on agricultural produce. He added that the committee constituted by the government on the issue has a majority of pro-government members and as such it would not do justice to the farming community.

The farm leaders also highlighted the issue of river waters and stated that the Centre was trying to control the water resources of the state and was ignoring the needs and rights of the people.

Farmer Dhanwant Singh Khatarekalan said, “The groundwater in Punjab has already depleted and with no river water, the state is staring at a huge crisis.”