Farmers to intensify stir as talks with govt fail 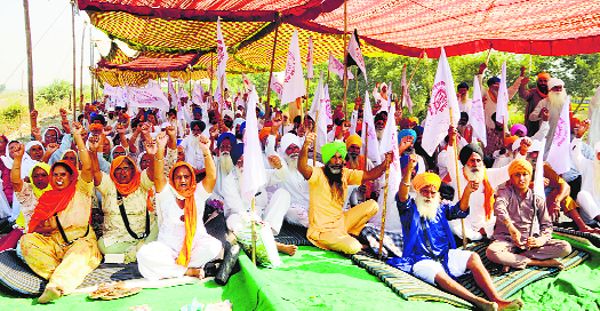 Members of the Kisan Mazdoor Sangharsh Committee raise slogans as they block railway tracks during a protest at Devi Dass Pura near Amritsar on Wednesday. photo: Vishal Kumar

With farmers’ association leading the protest against three agriculture-related Acts passed by the Union government recently, boycotting the meeting with representatives of the government today, the agitation is expected to be prolonged. The 31 farmers’ associations have already called in a meeting on October 15 to chalk out the future course. Dr Satnam Singh Ajnala of Jamhoori Kisan Sabha said: “The government has shown its non-seriousness, as no minister capable of taking the decision was present in the meeting.” He said the government officials present in the meeting could not have been able to take any decision if the talks had progressed.

Ajnala said the farmers’ associations would intensify the protest and a programme would be announced after meeting on October 15. Meanwhile, the sit-in at the Buttari railway station, near Beas, being held under the banner of All-India Kisan Coordination Committee, has entered its 14th day. — TNS