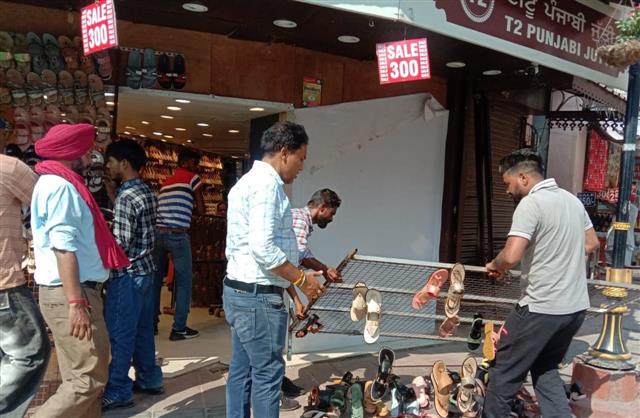 After repeated warnings, finally the Amritsar Municipal Corporation started a drive against encroachments on Heritage Street near the Golden Temple here on Wednesday. In a joint initiative taken by the estate wing of the MC and the traffic police against illegal encroachers at Heritage Street, the goods of encroachers were removed by MC employees.

For the last seven days, Additional Deputy Commissioner of Police (ADCP-Traffic) Amandeep Kaur along with traffic police personnel and Estate Officer Dharminderjit Singh were constantly warning illegal vendors and shopkeepers to remove their vends from Heritage Street on their own.

However, the encroachers did not pay heed to the warnings of MC officials and traffic police. Finally, the estate wing of the MC and traffic police swung into action. Staff of the Shiromani Gurdwara Parbandhak Committee (SGPC) assisted the MC during this action.

Estate Officer Dharminderjit Singh said joint operations by traffic police along with the SGPC would continue at Heritage Street and the seized goods of the encroachers would not be released.

It is worth mentioning here that more than one lakh devotees from various parts of the country and abroad visit Darbar Sahib. A large number of vendors sell goods by laying sheets on the ground at Heritage Street. Some of the vendors display their goods on folding beds. Local activists and NGOs working to boost tourism in the city are complaining that these encroachments were a blot on the image of the city and visitors get bad impression.

Deputy Commissioner Harpreet Singh Sudan and Municipal Corporation Commissioner Kumar Saurabh Raj held a meeting with police officers and asked them to give a warning first to encroachers, then take appropriate action.