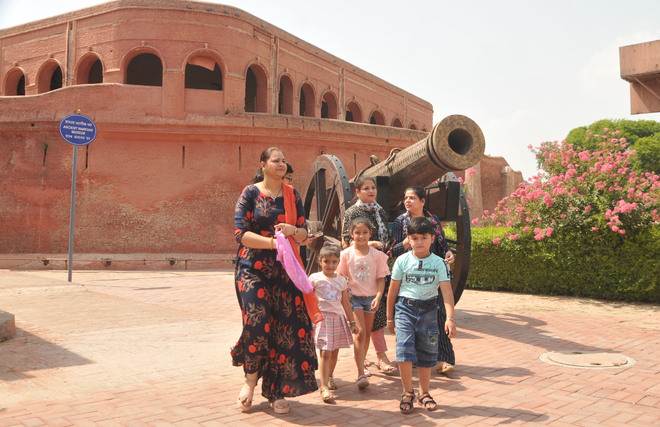 After a gap of almost two months, the authorities have reopened Gobindgarh Fort and Partition Museum for masses. The move comes after the state government had relaxed curbs and restriction on the movement. A partial lockdown was implemented in March due to the second wave.

Footfall at Gobindgarh Fort was encouraging on the first day. Upinder Singh, general manager, Gobindgarh Fort, said, “Tourists thronged the fort from morning till evening. Amritsar is an important stopover destination for those returning from Himachal and Jammu & Kashmir. It’s important that tourists places are allowed to operate during peak season. Now, the weekend lockdown has been lifted and we hope to serve more tourists as we can function at our full capacity.”

The fort has resumed all its activities except the light and sound show due to evening curfew (6 pm) restrictions.

Partition Museum, too, reopened all its galleries and activities for general public. Rajwinder Kaur, curator, Partition Museum, said, “Tourism industry is reeling under stress from the last one and a half year. Reopening will at least ignite a hope of revival.” She said they were waiting for another set of SOPs to be followed after June 25.

Punjab War Heroes Memorial and Museum will resume operations from June 22. Col HP Singh, project director of the museum, said, “ We need some time to prepare our galleries and update our technology. We will open our gates for public on June 22.”

Apart from religious shrines, including the Golden Temple, Durgiana Temple and Ramtirath Temple, most of the tourist spots, including Summer Palace of Maharaja Ranjit Singh, a panorama depicting life of the legendary king, Pul Kanjri, a tourism site associated with the Maharaja, Jallianwala Bagh and Sadda Pind have been reopened for tourists.